Pediatrician Remembers Measles Patients at Louisville General in the 1960s 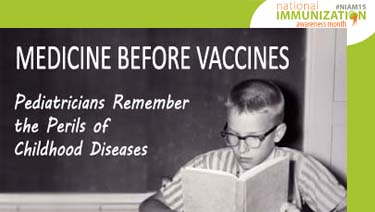 In recognition of National Immunization Awareness Month, Speak Now for Kids will be sharing articles from Medicine Before Vaccines, a new series from the American Academy of Pediatrics (AAP).

In 1962, during my senior year in medical school, I worked at the evening clinic at Louisville General Hospital. By 6:00 pm the waiting room was full, and it was not hard, even for a medical school student like me at the time, to diagnose the many measles cases that awaited treatment as coughs filled the air and many children presented with the distinct rash and red eyes that are common with measles patients.

The majority of cases we were seeing were measles cases. Measles is one of the most communicable diseases you can come across. The fevers associated with those patients were atrociously high, and the medication we used to reduce those fevers came with unfortunate side effects. The only thing we could do was treat the symptoms of measles; we could not help fight the measles infection itself at all. 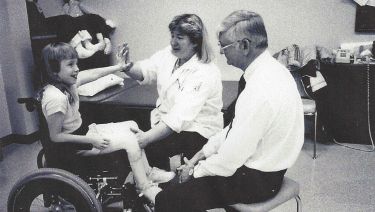 I vividly remember how sick the children were, and I also remember the worried expressions that those parents had. They felt worried and helpless. They had a right to feel worried, because some of these children died. I can tell you that the doctors were just as worried as the parents. We could not do much. We had no tools to fight or prevent the disease.

I have to admit that I was glad to rotate off the night clinic at Louisville General Hospital, because then I didn't have to face all those desperately sick children, and their worried parents.

It wasn't long after I rotated off the ER that we heard that a measles vaccine had been developed. We were extremely happy, because we knew we would soon have something that would stop these children from getting the measles.

The vaccine was distributed by the manufacturer very quickly. In the last two months of my internship, I do not remember seeing a single case of measles! At the time I was working with a worldwide patient population, because I was then in Texas at the U.S. Air Force Hospital, Wilford Hall.

Of course, the measles vaccine was not the only immunization to be introduced during my career. But for me, it was the most memorable. It was tied to my early years as a pediatrician, and it was so incredibly successful. For those of us who lived those days, and saw the specter of death in far too many children, we continue to be grateful for the amazing role vaccines have had in protecting our children.

Olson Huff, MD FAAP has practiced pediatrics in North Carolina all of his professional career. He is a veteran of the USAF, and served as a flight surgeon in Southeast Asia and at Pease Air Force Base in New Hampshire, during the Vietnam War. In 1987, Dr. Huff established the child development program at Thomas Hospital in Asheville, and under his leadership in 1994, Mission Children's Hospital, the only children's hospital in Western North Carolina, was formed. Dr. Huff has received many professional accolades, including the American Academy of Pediatrics special recognition award for advancing dental care to low income children. Dr. Huff lives in Black Mountain with his wife, Marylyn. They have three sons and four growing grandchildren.

Joyce Chapman commented 2017-08-14 02:45:44 -0400 · Flag
I could have been one of those children. I had the measles when I was little and we lived in Breathitt County, which is only 1 hour away. I’m not sure we went to the ER though. We lived way up in the mountains and you couldn’t even get to our house by car, you had to walk the last few miles by foot, at least most of the year when the roads would get washed out. We did have a doctor that came to our house if he was needed. I was so little I don’t remember how he got there, but, I do remember him coming and having to give me a shot of penicillin when I was sick, from time to time. I had several childhood diseases back then including two kinds of measles and the mumps and Rheumatic Fever and my mother used to tell me I also had the black measles and I’ve done research on that recently and found out that is what they used to call Rocky Mountain Spotted Fever. I just shake my head and wonder how I even survived all that because that was all before the age of 5!! We left that mountain and moved away when I was 5, so, how I survived all that and being so little is a miracle!
Emmi Herman followed this page 2016-04-03 02:08:40 -0400
Emmi Herman commented 2016-03-29 21:39:47 -0400 · Flag
Hi Dr. Huff, I am writing a nonfiction book about my sister who contracted measles encephalitis as a child in 1960 before the disease was vaccine-preventable. I came across your piece and this site as a result of a google search for more medical information about measles during the time in which my sister contracted the disease. Here is a link to her background and story.
http://measlesrubellainitiative.org/5723-2/
Thank you for sharing your early experiences as a doctor and for the positive things you wrote about the role of vaccines.