Cristi and her husband are parents to two special kids. One of their children, Justin, requires a lot more health care services than the other though due to complicated medical conditions. While the family has TRICARE coverage through Dad’s military service, Justin also qualifies for Medicaid because of his special needs. Yesterday, Cristi talked about Justin’s birth and some early struggles with insurance. Today, she’ll talk more about Justin’s life now and how Medicaid helps their family.

I do not get to stop at “mom” — I have also learned many nursing skills. Since I am blessed to be a stay-home mom, we do not receive extra home-health nurses except for sleep hours. Justin’s first few years were the hardest, as he was on the ventilator 24/7. He has a trach, or tracheostomy — a tube in his throat to connect the ventilator to — but needs daily care such as suctioning the mucus to keep it clear. Each day was a blur of reconnecting his ventilator as he learned to move, suctioning his trach, juggling medications, trying to keep him alive.

Today, a typical day for me starts with the night nurse leaving at 6:30 a.m. When I wake him, he requires three breathing treatments and eight medications. Since he’s been able to come off the ventilator during the day, I change that to just oxygen connected to his trach. In dressing him for the day, he also needs braces for his feet and calves. Throughout the day, he needs constant watching (for color, breathing patterns and oxygenation). In the evening, it is another batch of breathing treatments, more medications, and switching him back to a ventilator. 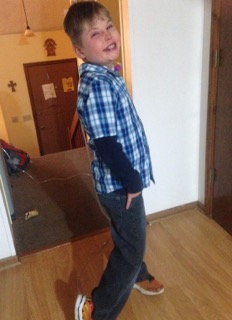 Thankfully, he has a nurse at school and he is able to spend his entire day with his peers — with the exception of a mid-day breathing treatment round and rests during endurance activities.

If he’s not in school, he is with me. His first years included PT, OT, and speech therapy 2-3 times per week but that has been reduced to pulmonary rehab once a week. He still sees a respiratory therapist monthly along with a pulmonologist for lungs, cardiologist for heart, neurologist for seizures, GI for g-button and a dietician every 3-4 months. With the diligence of the therapists, his other medical professionals, and our family, he is keeping up with his peers academically and socially.

During his first four years, TRICARE covered most of Justin’s needs and Medicaid served as wrap around for services that were not covered by TRICARE. It was pretty straightforward: TRICARE covered most expenses and night nurses and Medicaid covered respite time, co-pays, and the occasional denial of TRICARE authorizations. When Justin’s Dad retired from the military, TRICARE stopped covering home health nurses so Medicaid allowed me to continue having night nurses for Justin.

For us, Medicaid has been a tremendous blessing. Justin wouldn’t have been able to remain home without it.