In honor of Military Appreciation Month, Speak Now for Kids is highlighting some very special families. Most military families get all of their health care through the military insurance program known as TRICARE. However, the families highlighted in this series have a child with complex medical conditions who also relies on Medicaid — a program that covers more than 30 million kids nationwide.

Before Justin arrived, we had a healthy 4-year-old and were excited about our second child. Due to a long deployment, we’d “planned” to have our second a lot sooner, but were glad to know Dad wouldn’t be deployed again for a good while. We also loved the base and the town and were planning to finish his Air Force career and stay there.

Justin was born in Minot, North Dakota six weeks early. My water broke early, right after an appointment that showed I was measuring too large and had an extreme amount of fluid. My last memory of being pregnant was a moment of intense pain and a doctor yelling “Let’s go, we’re losing them both!” After an emergency c-section, I woke to a nurse telling me Justin was being flown to Children’s Hospital & Medical Center in Omaha. 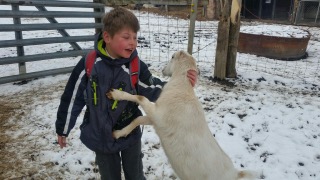 He was born missing half his diaphragm and with his liver/intestines in his lung cavity. Other than the obvious breathing complications, he also suffered a brain bleed that brought severe seizures and hydrocephelus, as well as compounded effects from his lungs on his heart and other organs.

We followed Justin to Omaha and stayed in the Rainbow House, a housing resource similar to bed and breakfast for families who live more than 60 miles from the hospital. After two months, Dad had to return to work in Minot, finish his job there, sell our house, and get military orders to Offutt. After being in the Rainbow House for four months, big brother and I bought a house here and Dad was able to transfer to Offutt.

When Justin was in the NICU, the social workers strongly urged me to apply for Medicaid. I remember specifically saying — we don’t need government assistance because we have TRICARE and they cover everything. But I followed their advice and have never regretted it.

Before his first birthday, Justin coded. He was on a considerable amount of oxygen and the maximum amount of support the vent could give. He was healthy enough to return home after five weeks that stay, but had to stay an additional three weeks as the hospital, insurance and I went around and around.

TRICARE would only authorize eight hours per night of nursing. The doctors said that wasn’t enough support and wanted him to go to a skilled nursing long-term care facility — but I refused. And around we went.

Finally, after what became an 8-week stay, the hospital social workers were able to get Medicaid to authorize 24 hours per week of respite care in addition to the nurse in-home for sleep TRICARE was providing.

I can honestly say that without Medicaid, TRICARE wouldn’t have been enough and Justin would have been at the nursing facility away from us. And I can confidently say that if it had been necessary for him to be institutionalized, he would not be the thriving rowdy boy that he is today.

Check back tomorrow for more from Cristi about Justin and Medicaid.