March 12 -18 is Brain Awareness Week. For all of the technological and medical advances achieved to date, there is so much still to learn about the workings of the brain. Children’s hospitals are leading the way in research and clinical practice to address neurological conditions, such as epilepsy, in patients.

Epilepsy is a neurological disorder marked by sudden, recurrent episodes of sensory disturbance, loss of consciousness, or convulsions, associated with abnormal electrical activity in the brain. There are about 472,000 children under the age of 18 with active epilepsy in the United States. 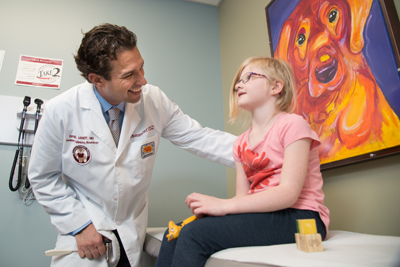 Children’s hospitals like Beaumont Children’s in Royal Oak, Mich., are leveraging the latest in technology and treatment to care for children with epilepsy and other seizure disorders.

According to Daniel Arndt, M.D., pediatric epileptologist and director of Beaumont Children’s Pediatric Comprehensive Epilepsy Center, one-third of patients with severe epilepsy will not respond to medication. That is why Dr. Arndt and his colleagues have devoted their efforts to treat patients with drug-resistant epilepsy. The team relies on the latest neurotechnology to help visualize and improve brain function.

Dr. Arndt believes the strength of the Epilepsy Center comes from competencies in electroencephalogram (EEG) analysis. An EEG is a test that is used to find problems related to electrical activity of the brain and diagnose epilepsy. Small metal discs with thin wires (electrodes) are placed on the scalp, which then send signals to a computer to record brain wave patterns. In addition EEGs, the Epilepsy Center also relies on other neurotechnology, such as brain mapping, to identify what specific functions different regions of the brain control and where the seizures are emanating from.

“We are unique in that we have a classic four-bed, pediatric-specific epilepsy monitoring unit staffed by pediatric-trained EEG technologists and other staff who monitor admitted patients 24-7,” Dr. Arndt explains. “In addition, we are one of only three pediatric-specific epilepsy centers in Michigan that offer a multidisciplinary care team approach for infants through teens. We also offer state of the art pre-surgical evaluation for drug resistant epilepsy and are looking forward to becoming the first in Michigan to offer specific epilepsy surgery treatments utilizing the Rosa robot and laser ablation this spring.”"

Beaumont Children’s is one of 37 pediatric-specific level 4 epilepsy centers in the nation, as designated by the National Association of Epilepsy Centers.