Our baby boy looked healthy on the 4-D ultrasound that we had done to help ease my mind just months before his birth — this was the last test we would have until we got to meet him. But from the moment of our first ultrasound up until that last one, our days had been filled with worry and many tests — they couldn’t pinpoint what it was that was wrong, even after performing a fetal echo, but something seemed like it was.

We were asked many times to abort the baby because things didn’t look right and they weren’t sure if he would even survive, but that wasn’t in our plan. We had faith that things would work somehow and we would get through. On May 2, 2007, two weeks early, our first child, Tyler, was born happy and healthy at 9lbs 11oz.

Everything was perfect and we were so in love with him.

At his three month well-visit the pediatrician asked if we knew he had a heart murmur. We didn’t. However, we were assured it was probably nothing and it would need to be checked out by a cardiologist. During that visit, we were told that he has a cleft mitral valve with regurgitation and that his heart was not exactly like everyone else’s; they would monitor it but eventually they would need to try to repair the valve. 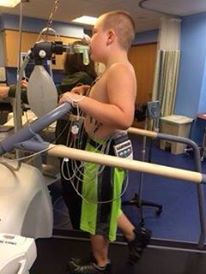 We made visits to the cardiologist every six months for x-rays, an electrocardiogram (EKG) and a echocardiogram. By the time he turned four, in May of 2011, I had given birth to our second son, Bodey. Our younger boy was born healthy, but I noticed that Tyler’s health seemed to be declining.  At his cardiology appointment we were told that the leaking of the valve had gotten worse and his heart was enlarging. They put him on medication that we hoped would prolong the surgery.

Unfortunately, it didn’t work. Before long Tyler couldn’t breathe doing the simplest of tasks and his migraine frequency had increased. After the cardiologist confirmed that the medication wasn’t working as it should, we met with Dr. Morell, the cardiothoracic surgeon at Children’s Hospital of Pittsburgh, who would be doing the repair.

The surgery was scheduled for the following month and the time leading up to that was filled with dread for us. We couldn’t imagine how our son was going to handle it and found ourselves thinking of the worst “what if” scenario — what if he didn’t make it? We got second and third opinions from surgeons at other hospitals in other states. But in the end, we stayed at our local children’s hospital.

Though he experienced some issues after surgery, Tyler was able to come home after nine days in the hospital. That whole time I never left his side and our family helped care for our newborn who wasn’t allowed to stay with us in the hospital.

Tyler wasn’t the same 4-year-old that went into the hospital. He was sick, he didn’t understand what was happening to him and he didn’t like to look at himself with the scars. He had some set-backs and returned to the hospital twice, via ambulance, but eventually they were able to get things under control. He wouldn’t even take his shirt off to take a bath.

We then took him to a local psychologist who seemed to work wonders and he was mentally getting somewhat back to his old self. He was on several medications that cost us hundreds of dollars each month. I had a good job with employer health insurance but we still had our monthly payments, deductibles, co-pays, and medications that weren’t covered. We were quickly drowning in debt because of the mounting medical costs and the time we had to take off of work to care for Tyler 24 hours a day along with our newborn — things were very tough. One day at the pharmacy, I broke down crying. The woman working behind the counter was so kind and asked what was wrong. I told her the story and how we were running out of credit cards to put the medications on that he needed each month to survive. She asked if we knew about Medicaid.

When we were at the hospital the social worker just asked if Tyler had medical insurance, which he did, so I guess Medicaid wasn’t brought up. Not only does he see cardiology, but he also sees a neurologist and pulmonologist. I went home immediately to research Medicaid and applied.

We were so happy when he was approved and we no longer had to worry about all of the numerous future medical bills. Unfortunately, they would only make it retroactive for so many months, not long enough to cover the many tests and medications or his surgery.  All families with children with serious medical conditions should have the opportunity to get coverage and know about Medicaid ahead of time.

Tyler is now 9 years old and looking at another open-heart surgery again soon because his heart health is declining as it enlarges. While we are dreading having to go through the surgery again soon, and many more times in the future, we are thankful that we already have Medicaid in place to help with the expenses. While I don’t wish these trials on anyone else, they have brought a whole new meaning to life for me — how I want to live, what is truly important and the person I want to be. I have the most amazing child, and while I wish he wouldn’t have to endure this life-long struggle, he is a kind, amazing person who I know will do great things, and I couldn’t love him more.

Looking for more resources for parents of children with CHD? Click here to learn more about Mended Little Hearts.