NOTE: On June 19-20, the Children's Hospital Association will be holding our ninth annual Family Advocacy Day in Washington, DC. Over the next month, we'll be posting stories by the amazing moms and dads of some of our attending children. Today's story is about Victoria Everett by her mom, Carye.

NOTE: On June 19-20, the Children's Hospital Association will be holding our ninth annual Family Advocacy Day in Washington, DC. Over the next month, we'll be posting stories by the amazing moms and dads of some of our attending children. Today's story is about Victoria Everett by her mom, Carye.

Victoria Everett was Twin B and was born at 31 weeks. She weighed just 3 lbs. 2 oz. and was 16 inches long. We found out through routine ultrasounds that Victoria had too much fluid on her brain and may have some problems. Once we knew that, we easily decided on a name, Victoria Faith. After 33 days, both Tori and her sister Brittany came home together.

Victoria showed some problems when she was four months old, and began undergoing testing on her brain. At 14 months old, Tori received a VP shunt. Right away, we noticed such a huge difference in her. Tori continued to vomit and could not keep food down. She also developed several pneumonias as a result of aspirating her food. We made the decision to have more surgery, which took place in January of 2004. Tori had a Nissen fundoplication and a G-Tube placed. All of Tori's fluids would go through her feeding tube, but she could still eat. Another test was done later in the year and Tori was diagnosed as a silent aspirator.  She was not longer able to eat anything by mouth and could only be tube fed.

In October of 2007, tests confirmed that Tori needed her Nissen surgery redone. She entered Johns Hopkins for surgery on October 15th. The surgery went well, but Tori's lungs began to collapse on the 15th and she was placed on an oscillator the next day. She also needed a blood transfusion and a PICC line. By the 19th, Tori was still doing poorly and the doctors needed to try something else. They put her on isoflourine gas and a ventilator. On October 23rd, Tori came off of the ventilator and came out of her coma. She then had her first stay at Mt. Washington Pediatric Hospital to rehab from being in the coma (as well as dependency on narcotics from the coma).

On May 30, 2008, Tori needed her Nissen redone again because she was aspirating again. Everyone was extremely nervous, but Tori did well. She needed 17 days to recover, but came home on Father's day. While we were in the hospital, Tori complained of headaches. Her shunt was looked at, but the doctors did not want to operate. 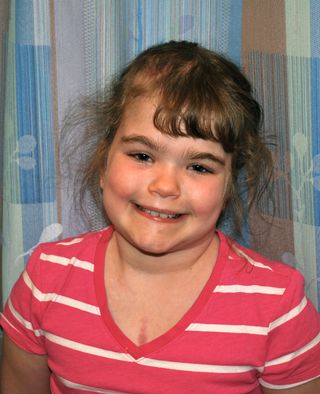 On July 6, 2008, Tori went to the ER because she complained of severe pain in her abdomen; it was discovered that her incision was infected. Her temperature when we arrived was 102 degrees. The doctors cleaned her incision and sent us home. That infection ended up being MRSA and she had another staph infection in her shunt. Tori had to have her shunt externalized on July 15. Tori's tests continued to come back positive for staph, so on July 18, she had a temporary shunt inserted. By August, Tori had everything put back together and was discharged on August 15. During the diagnosing of the shunt problems, Dr. Ahn, Tori's neurosurgeon, discovered that she had a Chiari Malformation. We were told that this could be what was causing all of Tori's swallowing problems.

On October 13, one year after she had the surgery that put her in the coma, Tori had Chiari Decompression Surgery where her first vertebrae and part of her skull were removed. Tori recovered well from the surgery however, it took a long time for her stomach to get adjusted to feeds.

Tori returned to Mount Washington Hospital where Dr. Katz could work on getting her feeds adjusted.  On November 4, she had a lumbar puncture that showed her brain pressure was high, and also had a fever of 103.5. Tori was admitted to the PICU for three days where it was discovered she had a life threatening blood infection. She was placed on antibiotics for two weeks prior to the surgery to fix her shunt. The night before Thanksgiving, Tori had emergency brain surgery to move her shunt to a new location in her head.

Tori went back to Mt. Washington to compress her feeds, but it was unsuccessful.  She was also positive for c-diff, a type of intestinal infection. Throughout 2009, Tori continued to have c-diff but stayed on medicine to keep her negative. Another procedure revealed that she had a motility problem in her intestines and continued to have reflux. In December of 2009, Tori was rushed to the ER when we realized she had adrenal gland failure. Tori had her Chiari decompressed again in March 2010 – at which point her intestines decided to fail. She had a central line placed and began being TPN dependent.  Tori spent the remainder of 2010 at Mt. Washington trying to get her body healthy.

One of the major problems was the c-diff, for which Tori had a lifesaving stool transplant procedure. Her sister Brittany ‘donated’ some of her stool, and Dr. Katz worked his magic.  After two procedures, Tori finally became negative for the first time in almost 2 years.

2011 brought a shorter hospital stay. Tori spent two months at Mt. Washington getting ready to begin eating again.  In June, she was finally able to start eating by mouth for the first time in almost seven years. She did great and loved trying all different types of food. It was amazing seeing her at nine years old, experiencing tastes and textures for the first time.

2012 was another long year for us. Tori was found to need another Chiari surgery. When she went for her pre-op physical, the anthesiologist wanted an echocardiogram. During the test, they found Tori had a large right arterial thrombus. After two weeks on bed rest, Tori finally had open heart surgery to remove the clot. The brain surgery was put off until three weeks after her heart surgery. Tori came home from the hospital and went to school the next week for the first day of school.

Tori has had two brain surgeries already in 2013. First she had a new shunt, and then another Chiari surgery. Tori’s Chiari caused her to get a syrinx. This causes her severe headaches and pins and needles in her feet and arms. She had a 4th ventricle catheter inserted to help drain the fluid off of her brain.  Tori’s headaches continue to bother her on a daily basis. We are currently trying to identify the best course of medicine and procedures to help her.

Now 11 years old, she is on 15 medications a day, and has diagnoses that make her see almost every kind of specialist that Hopkins and Mt. Washington offer. She’s a very complex child who has endured more problems than any person should have – but handles them better than anyone. Tori often asks when will she be a “normal” girl – but of course, in our eyes, she is absolutely perfect.