Take a walk on the wild side: the impact of smart technology on our teens

In 1972, Lou Reed released his album Transformer, the fifth track of which was the debut of the song Take a Walk on the Wild Side, one of, if not the most iconic of Reed’s immense catalogue of work. It was raw and unconventional, a departure from the style and prosody of the rock that had come before. Young people, particularly teens, are attracted to the raw and unconventional. It fulfills a need in them for departure from the dependent years of their childhood — when their parents’ experiences and values dominated — toward something all their own. Of course, an element of danger is usually considered necessary on the part of the teen. Rock and roll and the culture that came with it would transform not only music, but generations of young people through the sixties, seventies and eighties.

With the inception of the internet, we humans have created another dimension — one in which some people dwell without break for extended periods of time. And, like the streets and scenes that Reed described on his jaunt through New York City in the early seventies, there are places in the internet where our teens travel secretively that certainly contain the same themes of sex, gender identity, race, drugs, violence and coercion conjured in Take a Walk on the Wild Side. If we who care and advocate for children are to help our patients and their parents navigate this brave new world, we too need to take a walk there if we are going to have any hope of relating to what they are going through. A review of the various ways the internet and smart technology has impacted our kids will be presented in the paragraphs that follow.

One of the first things a parent notices once a pre-teen or teen is given his or her first access to smart technology is that that device, usually a cell phone, becomes inexplicitly melded to the child’s very consciousness. In other words, they are never without it, not just physically like a pair of glasses or a wallet, but in their awareness. They are always mindful of it and concerned with what is happening on it even when they have been convinced to put it down. This, in turn, means they are distracted, of course. When one is absorbed in one activity, particularly visually such as with TV or a cell phone, it is difficult to focus on other things such as the question your mother is asking or the lesson your teacher is trying to relate. This is not unique to teens, of course, as we adults are also overly absorbed in our technology, but the intensity in teens is amplified. With an adult, if something goes wrong with or on our cell phone, it is a nuisance and perhaps even an injustice. With a teen, if something goes wrong with or on their cell phone, it is the end of their entire world. Of course, it is not really, but that is very much how they perceive it, at least in the short term.

Thus, one of the first negative impacts inherent in smart phone use has been the addictive nature of the devices and the inherent distraction. Dr. Elizabeth Englander, Professor of Child Psychology and head of the Massachusetts Aggression Reduction Center (MARC) at Bridgewater State University, is famous for reminding her audiences that “smart phones are not phones!” She goes on to remind that they are internet ready computers. This is an important first lesson parents need to hear about their child’s smart phone: indeed, kids spend far less time on the actual phone than using it for texting, social networking, gaming and watching YouTube videos. These seem like relatively harmless pursuits until one realizes that a teen’s texting, social networking and YouTube watching are nothing like what their parents are doing with the same platforms. The content, language, and goals in using these various platforms are entirely different for the teen than for older adults. Even the written characters of communication are different, with use of slang terms and abbreviations predominating the chatter. Teens are commonly on their smart phones late into the night and will often tell you that they do not want to risk missing what someone might say about them while they sleep (so called FOMO – fear of missing out). Social status is extremely important to a teenager and often a source of high anxiety. The fact that their friendship group is more or less continually online talking gossip keeps them up so that they can monitor the conversation. The ripple effect from sleep dysfunction can contribute, as we are all aware, to problems focusing in school and to other symptoms such as headaches and increased mood dysregulation. Thus children/teens with neurodevelopmental and/or psychiatric disorders fare even worse for lack of adequate sleep.

By far one of the most harmful phenomena to evolve out of smart technology has been cyberbullying. Cyberbullying, briefly stated, is the use of technology to harass and victimize. By its nature, the trauma it inflicts is psychological. At the Bullying and Cyberbullying Prevention and Advocacy Collaborative (BACPAC) Clinic at Boston Children’s Hospital (Raffalli & Pomeroy, 2016), cyberbullying is sometimes dubbed “the stealth bomber” of bullying because of its perceived distance and anonymity. This gives a false feeling of security for the sender in many cases, since the source of the cyberbullying can often be traced. At the same time, the rise of anonymous social networking platforms is making it increasingly difficult for law enforcement to do its job. 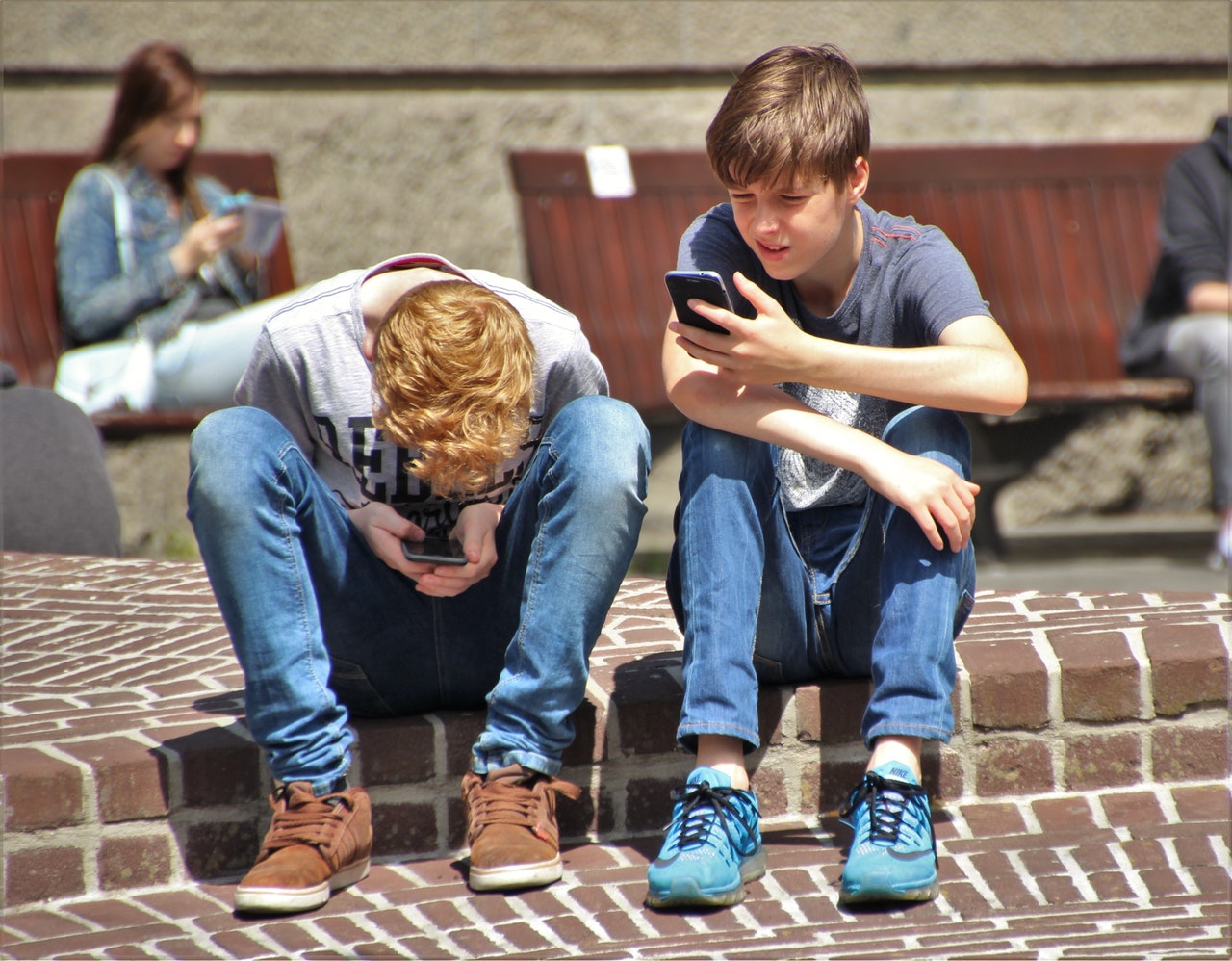 The standard three underpinnings of bullying, by definition, are the same for cyberbullying as for more traditional forms of bullying. First, the harassment of the victim occurs repeatedly, or is likely to be repeated, over a period of time. Second, the intent behind the harassment is meant to cause harm either mentally or physically to the victim. Finally, an imbalance of power is apparent whereby the victim is unable to adequately troubleshoot the situation and to get the bullying to stop. Another important fact to relate to families and schools is that bullying/cyberbullying is recognized both legally and medically as a form of abuse (Englander, 2013). This is principally because the medical and psychological consequences, as well as the victim’s reluctance to report, are similar to other forms of abuse. Thus, pediatricians should be as invested in stopping bullying and cyberbullying, when it comes to their attention, as they are to other forms of child abuse (Amer. Acad. of Pediatrics, 2009; Garner, Shonkoff, Siegel, Dobbins, 2012).

Parents should also be made aware that peer cyberbullying happens much more frequently than predation from adults; a child is far more likely to experience threats from other children than from adults. Victims of cyberbullying are often reluctant to report and might resist assistance. They may even support or try to defend the abuser (Englander, 2013). Both bullying and adult predation can have serious outcomes, including death.

Victims of cyberbullying often feel that they have no way out. The attack can often be from an unknown source and there is an inherent potential for the harmful content to be read over and over again. The victim is left only to imagine how many people or how often the mean message is being read. To make matters even worse, distribution of the abusive message is literally worldwide. The messages are meant to torment the victim and the target is usually afraid to bring adults into the situation for fear it will make matters worse or that it is simply a hopeless situation. Instead, the victim may try to bully back which is rarely effective and which may very well get the victim, the very person being abused, into trouble. One study of more than 7,000 U.S. schoolchildren, conducted by the National Institutes of Health (NIH) and published in the J. of Adolescent Health in September 2010, found that students targeted by cyber-bullies, "may be more likely to feel isolated, dehumanized or helpless at the time of the attack."

The potential strategies of the cyberbully are multiple (Raffalli, 2015). They include direct attacks where the identity of the cyberbully(s) is known (i.e., not hidden) and the victim is plainly harassed. This can include straightforward insults or foul language. It can include cruel suggestions made to the victim such as “you should kill yourself,” one of the more common attacks reported by victims in the BACPAC clinic. It can come in the form of rumor spreading or other personal attacks. There may be a direct threat to the victim, including death threats. The victim’s family might be insulted or threatened. Emailing pornographic material to the victim or sending a virus to the victim’s computer are other ways to directly attack.

Indirect forms of cyberbullying are a bit more sophisticated and stealthy. These often involve a version of pediatric identity theft whereby the victim’s identity is appropriated by the bully with the intent to do damage to others who then retaliate against the victim (Raffalli, 2015). A person’s password is stolen, for example, and then cruel messages are sent to all the friends of the victim whose account has been hacked. False reports to an ISP (internet service provider) are another way to cause a victim distress. Another method frequently encountered is the setting up of a phony social network account by the bully in the victim’s name, complete with a profile picture. This can actually be done quite easily on many platforms including Facebook. The perpetrator then makes inappropriate comments regarding peers that appear to be coming from the victim who is then ostracized or even berated by the peer group. There have been cases where even the victim’s parents have fallen for the ruse and joined in on criticizing the victim, their own child. As mentioned earlier in this article, the evolution of anonymous social media platforms (e.g.: Yik-Yak, After School) is increasing. Such encrypted platforms that do not allow for discovery of the sender, are ripe for cyberbullying.

Check back tomorrow for part 2 of "Take a walk on the wild side."