NOTE: On June 19-20, the Children's Hospital Association will be holding our ninth annual Family Advocacy Day in Washington, DC. Leading up to the event, we'll be posting stories by the amazing moms and dads of some of our attending children. Today's story is about Sydney Mayrell by her mom, Erin.

NOTE: On June 19-20, the Children's Hospital Association will be holding our ninth annual Family Advocacy Day in Washington, DC. Leading up to the event, we'll be posting stories by the amazing moms and dads of some of our attending children. Today's story is about Sydney Mayrell by her mom, Erin.

The words of a parent's worst nightmare, "your child has cancer." These are the words that I heard on April 12, 2010 when Sydney was just three years old…

Before a family trip to the beach, I felt a lump in Sydney's left leg. After a week it hadn’t gone away (though it caused her no pain at all). I scheduled an appointment at her pediatrician's office and with the use of a sonogram they were able to tell us those devastating words above. We were immediately referred to Children's Medical Center of Dallas, specifically the Center for Cancer and Blood Disorders department; a place any adult would be intimidated to go and now I was taking my toddler who was completely oblivious that anything was going on inside her tiny body. I remember sitting in the waiting room thinking, "this cannot be real, everyone seems so happy and excited like nothing is going on; don't they know that these children have cancer?" Now I think how naive I was, this is a happy place because it is able to give us answers and a plan. Sydney was called back to see a pediatric oncologist who specializes in soft tissue tumors. After a physical examination they sent us to radiology and then back to the clinic to discuss the findings from radiology. After taking a few deep breaths and realizing we are not alone on this trek through the unknown, they were able to tell us that it was more than likely a soft tissue cancer called Rhabdomyosarcoma, but that a biopsy would need to be done of the tumor to verify the histology. 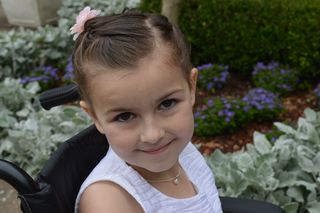 We were referred to an orthopedic oncologist to complete this biopsy and possibly to refer back to later on when chemotherapy had shrunk the tumor down enough to remove it. Final histology report came back; confirmed Rhabdomyosarcoma in the left leg, with positive lymph nodes in the pelvis, making it Stage IV due to metastases. Another devastating blow to our emotions, but yet again, the doctors never disappointed and ALWAYS had a plan of action.

After several rounds of chemotherapy, it had been determined that the tumor could be resected along with a large part of Sydney's quadriceps muscles so there were no questions of the cancer being removed from her leg. After what seemed like an eternity, we heard the most joyous words we had heard in three months, "the cancer is out and all margins of the muscle are negative for cancer." Sydney had a speedy recovery following her surgery and of course what every child should have; an "Adios Rhabdo" party!

Sydney continued to receive intense chemotherapy until June 28, 2011. She endured countless blood transfusions, platelet transfusions, hospital stays, and radiation. She is now two years out from her last chemotherapy treatment and cancer free! She will be moved to the survivor program in June of this year as long as her upcoming scans are clean. She truly is a survivor, a warrior, and the most precious hero a parent could ask for. She has settled into life with a scar that runs the length of her upper leg and a great story to tell all of her friends about how the scar came about. Continuing to work through the effects of the chemotherapy and radiation is our latest adventure, including most recently a fracture of her femur caused by the weakening of her leg due to radiation.

We are now the ones walking into the clinic happy and excited and full of hope and this would not have been possible without the outstanding work of all of the doctors, nurses, social workers, and entire staff at Children's Medical Center. I will forever be indebted to these staff members who celebrated Sydney's triumph over cancer, and who ultimately saved her life and was able to give me my enthusiastic, empathetic, loving, and still independent now six and a half year old first grader!

Click here to read more about Sydney's condition and treatment.