NOTE: On June 19-20, the Children's Hospital Association will be holding our ninth annual Family Advocacy Day in Washington, DC. Leading up to the event, we'll be posting stories by the amazing moms and dads of some of our attending children. Today's story is about Patrick Bibbee by his mom, Amanda.

NOTE: On June 19-20, the Children's Hospital Association will be holding our ninth annual Family Advocacy Day in Washington, DC. Leading up to the event, we'll be posting stories by the amazing moms and dads of some of our attending children. Today's story is about Patrick Bibbee by his mom, Amanda.

My son, Patrick, loves life. He literally soaks it in with every sense of his being. And he embraces it with a love that is exuberant, uninhibited, and even fearless. Others look at him and think he's just a wild, outgoing, two-year-old little firecracker with matching dime-sized dimples - that he was born that way. Maybe that's the case. But when I look at him I see a soul with a history so deep and raw, that it's obvious to me his early struggles have contributed to his zeal for life.

You see, Patrick is a twin who was born far too soon. 23 weeks to be exact. That's 17 weeks too early. He weighed just 1 pound, 7 ounces at birth and was less than 12 inches long. His eyes were still fused shut, his skin was translucent and paper thin, and his tiny hands and feet were only as big as my thumb. He and his sister, Paige, were the smallest, and ultimately, sickest babies I had ever seen. At 23 weeks gestation, no organ is prepared to or able to function on its own. They both relied on a ventilator to breathe and numerous medicines and interventions to keep their organs from failing. Those first few days, Paige fared far worse than Patrick. At just six days old, she developed necrotizing enterocolitis (NEC), a gastrointestinal disease that involves infection and death of the intestine. Unfortunately, it's the most common and serious gastrointestinal disorder in preterm infants. It came on fast and furious. So much so, that it took her life that day.

Looking back, she ultimately saved her brother's life at the same time. Because her condition deteriorated so fast, the doctors decided to recheck Patrick's abdomen with new X-rays that were taken from a different angle. And there it was. Free air in his belly, which signified a perforation, or hole, in his intestine. He underwent emergency surgery where a portion of his intestine was removed and an ileostomy was performed. His life was saved that day, and it wouldn't be the last. This was the first of eight surgeries Patrick would undergo during his six month NICU stay at Nationwide Children's Hospital (NCH) in Columbus, Ohio. He endured two more abdominal surgeries, the ligation of a heart vessel, and several eye procedures due to Retinopathy of Prematurity and a detached retina. In between all the surgeries, he battled bronchopulmonary dysplasia, kidney reflux, brain bleeds, infections and anemia. Every day it seemed there was a new obstacle to overcome. But Patrick and his doctors never gave up. 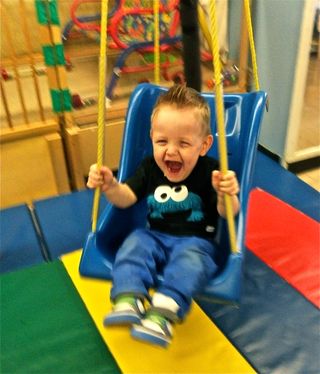 During Patrick's hospitalization, we watched three seasons pass us by from the windows of NCH. During this time, the hospital became our second home and the doctors and nurses our second family. I can't put into words just what the doctors and nurses who took care of my son mean to me. They saw me on my best days, and they saw me on my worst days. They comforted me on the days that Patrick struggled, and celebrated with me on the days that he reached what had formerly seemed like insurmountable milestones. They never gave up on my son. They not only healed Patrick but helped heal our family as well. They really are extraordinary people with extraordinary jobs.

On top of everything, my husband Shannon, a Captain in the Army Reserves, was deployed to Iraq during Patrick's entire NICU stay. Because of his being called to active duty, we were covered by the military's TRICARE insurance plan, which paid for 100 percent of Patrick's hospital bills. With a child struggling to survive and a husband overseas, I can't imagine the additional stress of having to worry about how we would pay for another surgery or another night in the hospital. We realize we're one of the fortunate few who didn't have to worry.

Shannon, Patrick and I look forward to traveling to DC next month to represent NCH for Family Advocacy Day. We'll be advocating not only for those preemies, like Patrick, who survived and thrived, but also for those tiny angels, like Paige, who fought a courageous, admirable battle that not even the largest of giants could have won.