Parenting a Child with Behavioral Concerns 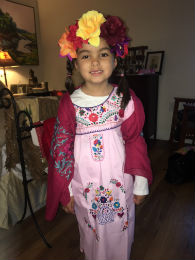 May 10 is Children's Mental Health Awareness Day, and May is Mental Health Month. Today, Norida Torriente shares her testimonial about parenting a child with behavioral concerns.

As a woman who made a conscious decision to undergo fertility treatments at the age of 42, my doctors ensured that I had access to the latest in genetic testing and the best medical care available to increase my chances for delivering a healthy child. However, no amount of prenatal genetic testing could predict that my daughter, Ilsa, would eventually be diagnosed with attention-deficit/hyperactivity disorder (ADHD).

ADHD is one of the more common neurobehavioral disorders, affecting approximately 11 percent of children ages 4 to 17 in the U.S., according to the Centers for Disease Control and Prevention. Even though it’s so prevalent, many people may not realize the impact it has on a child, other than a propensity towards inattentiveness and impulsivity. When left unchecked, a child with ADHD is more prone to having low self-esteem, difficulties with peer interactions and problems in school and work settings. Anxiety and depression are often comorbidities with ADHD.

Luckily, Ilsa does not have self-esteem issues. On the contrary, she has oodles of self-confidence. (This is a child who once fell on her bottom and cried out, “I fell on my beautiful, beautiful butt.”) Fiercely independent from an early age, Ilsa displayed a determination to do all kinds of tasks on her own, from cutting vegetables with a paring knife at age 2 to selecting her clothes and dressing herself at age 4. Ilsa is also well-liked among nearly all her peers. She has a number of classmates she considers her “best friend,” and the feeling is mutual. She’s a child who loves dressing up as a princess, but can also crack a good fart joke. (I often refer to her as the Amy Schumer of the preschool set.) A bright child who lets nothing slip by her, she started adding two to three single digit numbers in her head at age 4.

A sense of humor, determination, creativity and problem-solving are actually some of the positive attributes of children with ADHD. However, when your child moves and thinks at the speed of dispersed light, it may be hard to see all those wonderful qualities.

In Ilsa, ADHD has taken the form of aggression towards authority figures and temper tantrums that began at 9 months old and went beyond the terrible twos. At the private Montessori in which she was enrolled, Ilsa would often peel away from the group during lesson plans and create a scene to make sure the focus was on her. When she did not want to follow directions or transition to another activity from a teacher or an aide she would kick them. Her father and I quickly came to learn that when her teacher referred to Ilsa as having leadership skills, she was really saying that Ilsa was a “difficult” child. This behavior did not surprise us since we had witnessed this at home and in her extracurricular activities.

The school urged us to have Ilsa assessed for behavioral disorders and a learning disability (her teacher was certain that Ilsa had a learning disability because she refused to do the sound exercises for readers at age 4). It was incredibly difficult to identify a therapist who took private insurance. Behavioral assessments can cost upwards of $2,500 without coverage. We finally identified a social worker who gave Ilsa a preliminary diagnosis of ADHD, but she encouraged us to do further testing with a clinical psychologist. It would be another five months before we would be able to have Ilsa assessed at Children’s National Health System because of the demand for these services.

In that time, Ilsa started kindergarten in what was to be her final year at the Montessori. Her outbursts and negative reaction to authority escalated. Her father and I were called in to meet with the school staff several times that fall to determine solutions to her situation. The staff had a hard time understanding why it was taking so long to get the latest round of assessments, but we reassured them that all we could do was wait for the provider that was appropriate for her age and situation. We saw the solution to Ilsa’s behavior as a marathon — the school wanted to make it a sprint.

In following up with the hospital to determine whether  the assessment could be moved up because of Ilsa’s escalating behavior, the pediatric neuropsychology office flagged Ilsa for a behavioral therapy that was meant to help us as a family manage Ilsa’s behavior. The first part of the therapy called for us as her parents to learn a new way of communicating with her through play therapy, emphasizing pride skills — reflecting on the child’s comments, narrating the child’s actions and praising the child at every given opportunity, no matter how large or small the achievement. Upon mastering the pride skills, we moved on to the next phase, having the child learn to take direction from authority figures.

The assessment at the hospital confirmed her initial diagnosis of ADHD; however, she did not have a learning disability. Quite the contrary, she scored exceptionally high on intelligence, but her ADHD-related behaviors make it difficult for her to display those skills and for others to fully appreciate them. The neuropsychologist’s recommendation for Ilsa was to continue with the behavioral therapy and to begin with medication to manage the ADHD. The rationale for the meds: young children with ADHD could inadvertently harm themselves should they impulsively run into traffic, for example.

Just as we were starting the behavioral therapy and waiting on the assessment results from the hospital, the staff at the Montessori made the decision that they could no longer handle our daughter asked that we find another school for her to finish out her kindergarten year. One of the hardest things we ever had to do was tell our little girl that she had to go to another school because her current one could not help. She was crushed and sobbed at the news.

Since we had planned to transition her to the public school system at the start of first grade, we decided to enroll her in our local elementary school. When we contacted them, we gave them Ilsa’s history. At our first meeting with the school, there was a team of eight teachers, administrators and counselors ready to support Ilsa and whatever her needs may be. By the end of the meeting, I was in tears because of the joy I felt that we had found a place that would work with Ilsa to provide her a safe and accepting place to learn and grow.

Ilsa is only at the start of her journey living with ADHD. While there is a slim chance that she will outgrow the condition, more than likely she won’t. It is a part of who she is as much as the color of her hair, her can-do spirit, and the mischievous twinkle in her eye. But learning to manage Ilsa's ADHD will be critical to her long-term success — however she should define success.

Though I’ve worked for the Children’s Hospital Association for nearly 12 years, I never thought that I would have an ongoing need for the services of my local children’s hospital. I count myself fortunate to have a children’s hospital so close to home with knowledgeable experts to help us and Ilsa manage her ADHD.