We met eight-year old Paxton at the 2016 Speak Now for kids Family Advocacy Day. Just three years ago, he was diagnosed with stage 4 Burkitt’s lymphoma leukemia at the age of 5. Now cancer-free, Paxton has continued to thrive in all things basketball (he’s a fan of Ohio’s own LeBron James). As we come to the end of Pediatric Cancer Awareness Month, Paxton’s mother, Jamie, shares the journey her family has taken to make sure Paxton received the all-around health care – both physical and mental, needed to successfully fight this diagnosis.

Today, Jamie shares how important it is to be an advocate for your child’s health care on both the local and national level. 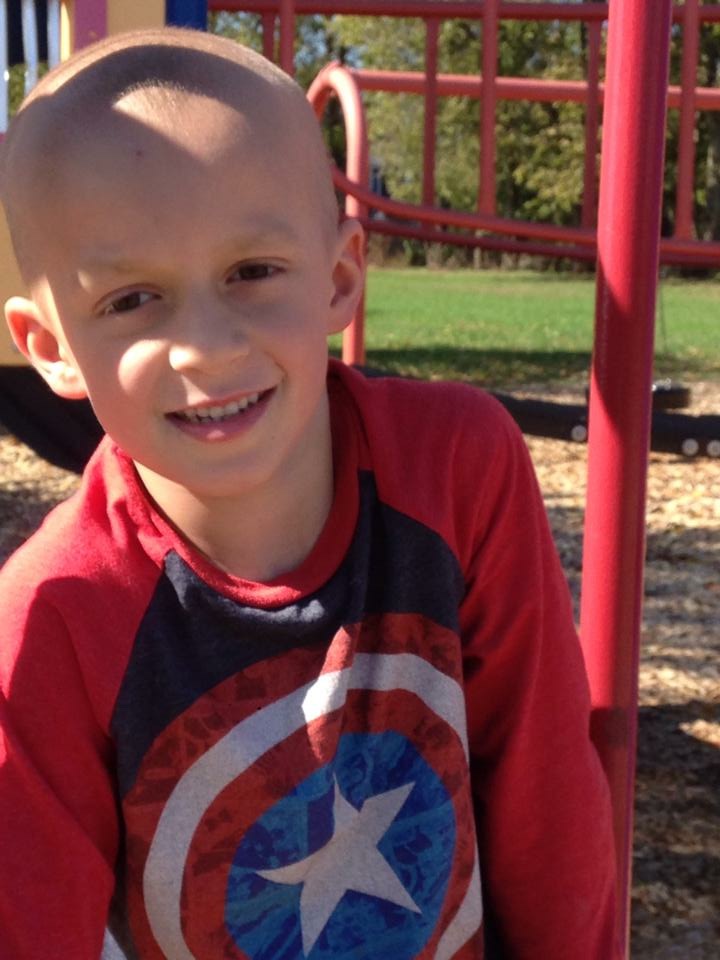 September 9, 2014, Paxton finished treatment and the waiting game began. Now we wait to see if he is one of the 70% of survivors that get a secondary cancer or life-threatening side effect. In his case, he will most likely get Acute Myeloid Leukemia from toxicity from the etoposide and cyclophosphamide. Or heart failure. Or other major organ failure….maybe his kidneys from being overworked processing the toxic chemicals.

Paxton survived, but threatens to kill himself because he doesn’t understand why God would allow this to happen. He screams at me that he hates me and wants another family. He screams at his sister because he is so angry that he got cancer and she didn’t. He cries that ‘he is the worst son in the world.’ Neighborhood kids worry they have cancer. When these kids see a dead bird, they tell Paxton that he gave the bird cancer and caused it die. He is embarrassed of me, asking why I can’t be ‘more cool’ and not worry so much like all the other moms.

Paxton goes to school, gets off the bus and threatens to kill himself. Not every day. But many days. I put the knives away. I make sure there’s nothing in his room he could use to hang himself. Ironically I put away his string of 500 + ‘courage beads’ given to him…each one symbolizing an act of bravery it took to get through his many months of treatment. The string of beads is ever so long, long enough to be use as a rope to hang himself.

Despite being in public health myself and a former lobbyist for the local National Alliance on Mental Illness chapter, I struggle to find him the psychological help he desperately needs. I set up meetings with our youth pastor after calling psychiatrist after psychiatrist. Despite living in the second largest city in the state I find no psychiatrists specializing in pediatric cancer survivorship issues.

Literally, after months of trying and desperation, his public school connects me with a LCSW that travels the district. His counselor wanted badly to help but, like so many times is the case, didn’t know how to ‘deal’ with children like Paxton. I am thankful after many months of feeling hopeless and hearing my son, my hero, my cancer survivor proclaim that after beating cancer he wanted to end his life, I finally found support for him. But I still feel like such a failure for allowing him to get cancer in the first place then not being able to do anything, being so powerless, to stop these lifelong psychological terrors from plaguing him.

As part of Childhood Cancer Awareness Month, you will likely hear that 80% of children diagnosed with pediatric cancer will survive. We are thankful. But this is survivorship. It is the haunting black cloud of death always on the horizon. It is the intense PTSD which I experience every time I see one of those pictures while just wanting to scroll through Facebook to pass the time or keep up with friends, or every time I hear a hospital machine beeping, or see what really is a reactive lymph node. Or see a bruise on any of my children. It is Paxton wanting to die because he doesn’t understand why his body tried to kill him. This is survivorship for the 80% lucky enough to survive. 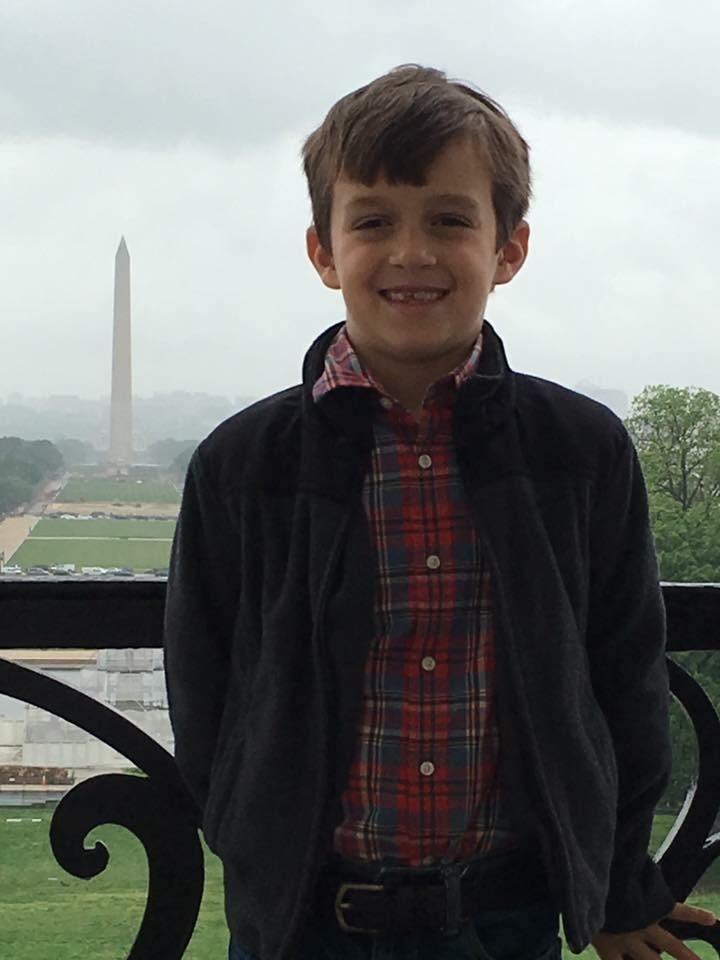 During Paxton’s illness, I frequently wrote on his Facebook page about our victories and setbacks that became a social media movement of almost 15,000 “Prayers for Paxton” and “Paxton Strong” prayer warriors. Now, I rarely post because survivorship and the secret demons that accompany it are more difficult in some ways to share. But today I share because it is too important not to. I think Martin Luther King Jr said ‘we begin to die the day we become silent about things that matter.’ This matters. A lot.
I also believe in the adage you have to have a test to have a testimony and that there’s power in pain. That pain can be used as a microphone. So today, this Speak Now for Kids blog is my microphone to scream that these children deserve more than the measly, offensive less than four percent of all national cancer funding.

Did you know that many countries around the world have pediatric cancer included in their national cancer action plans? But not in the United States. The Centers for Disease Control and Prevention (CDC) gives money to each state to come up with a plan – but there’s no requirement to include childhood cancer. SAs a result, most have no significant language representing meaningful work. Really?! The most powerful, most wealthy country in the world?!

My home state of Kentucky is one of those. I am thankful to our governor’s office for being responsive, as well as our Kentucky Cancer Consortium who heeded my call for immediate action on the issue. As a registered lobbyist at the time of Paxton’s diagnosis, I vowed to use every political connection I ever had to make a difference for these desperate children.

On September 21, 2016, more than 30 state legislators participated in a health and welfare hearing on the importance of including childhood cancer in our state plan and consortium members will vote in October or November to officially adopt the language as state policy.

PLEASE, if you are living and breathing today, go to www.acco.org to find out if your state has childhood cancer language in your state cancer action plan. If it doesn’t, contact Speak Now for Kids or the American Childhood Cancer Organization to find out how to make a change. Do it NOW, this month, in honor of all the children suffering from Childhood Cancer. Don’t just see the bald heads and feel sad then go back to your daily routines. Stop and let that pain be for a purpose and turn your outrage into an outcome!
As we go through life so purposefully thankful I pray there are many more days we can simultaneously experience jubilation in the tribulation (thank you Levi Luscko for that phrase!). Cancer kills too many of our precious children and leaves many more permanently-scarred physically and mentally. Why is it okay in our country for so many children to keep on dying every day?

Remarkably, a congressional staffer in Washington D.C. asked me what my hurry on this issue was. Excuse me?! Because our children are dying – EVERY DAY! Where’s the media the other 11 months of the year?! We don’t need a feel good story one time a year in a designated month or proclamation or a story about how amazing it is for a professional sports team to wear yellow ribbons. We need a freaking cure. Now. Thanks for reading ---- (drops the mic). #speaknowforkids #acco #levilusko #morethan4 #prayersforpaxton

Lori Boils commented 2016-09-28 14:11:19 -0400 · Flag
Naively I had not even considered the PTSD these precious children suffer after their battle with cancer. I am ashamed and embarrassed by that fact. The relief of hearing that they beat it was as far as my mind went. I have considered the PTSD parents surely suffered, but somehow thought the children didn’t have to deal with that problem. I feel stupid. I also feel enraged that there is so little funding. I will surely take your suggestion seriously to go to those websites and to make sure my voice is heard concerning this. I am in awe of the tremendous strength your family has shown throughout this nightmare Paxton endured, and I will continue to keep him, you and your family and all the others who are in this horrific battle in my prayers. May God bless each of you and keep you healthy, happy and Paxton Strong. We will not rest until this monstrous disease is wiped off the face of this earth, In Jesus’ name I pray.