My Real Life Journey as a Pediatric Cancer Survivor’s Mom

Three years ago, Paxton was diagnosed with a form of stage 4 pediatric cancer. At age 8, he is now cancer-free. Paxton’s mother, Jamie, shares the journey her family has taken to make sure he received the all-around health care – both physical and mental, needed to successfully fight this diagnosis.

September is Childhood Cancer Awareness month, and I am thankful for it and hate it all at the same time. This month, our social media is flooded with pictures of bald children with no eyebrows, startling and horrible (and true) statistics, and images of empty porches where little girls should have stood on their first day of school.

I love the awareness that this month brings, but all the images and info. bring the possibility of losing Paxton too close to home. Seeing the images throw me into a panic attack – a very real PTSD. But something draws me in to the stories. Because once you are a cancer mom, once you’ve seen your child fight the most awful type of evil in this world, once you’ve heard the screams of dying children being held down by mothers lying to their children that things are gonna be all right….you can’t “un-know” that.

My pride and joy, my life, my baby…my 5-year-old son Paxton was diagnosed with stage four Burkitt’s lymphoma leukemia on March 3, 2014. I was a professional cancer advocate at the time, and I had no idea that cancer kills more children than all other diseases combined.

Our story began at baseball practice one evening in late-January 2014. He turned to throw the ball. I will never forget the exact spot on the floor where he was standing. A large lymph node popped out of his neck. I audibly gasped for air and ran out to him immediately to touch it.

I took him to the pediatrician over and over and over again – only to be told it was a reactive node and to watch and wait. He had night sweats. He said his legs hurt. We ordered blood work on Valentine’s Day 2014, and it was all normal. The mass continued to grow very quickly, and our pediatrician looked at me like I was out of my mind.

I knew it wasn’t normal. I decided to get him in to see our family Ear, Nose, and Throat doctor. I was ready to be arrested that day if I couldn’t get an appointment. I had fully planned to stage a protest in the lobby of that office and demand to see a doctor. After weeks and weeks of being dismissed by our pediatrician, I knew if I didn’t take drastic measures Paxton would not make it. That weekend, we had visited my grandmother battling relapsed lung cancer. I knew in my heart Paxton had cancer too (she died three weeks after his diagnosis and I never saw her again). 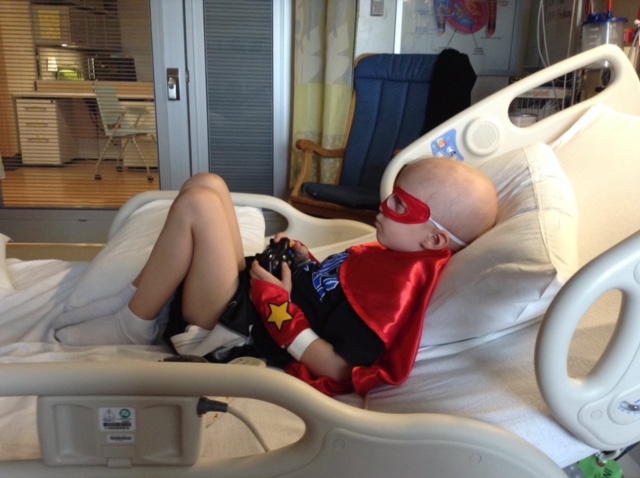 It was clearly a fast-growing tumor. I kept taking pictures of it day after day on my iPhone to document the quick changes. Thankfully the ENT took me seriously. And two weeks after his blood work was completely clear he was diagnosed with cancer. Three days later we were told it was stage four – lymphoma and leukemia all at once spreading to 95% of his bones, lymph nodes, abdomen, and lungs in less than 3 months.

We left home on March 3, 2014 and didn’t return for over 100 days. Paxton fought and fought through 8 rounds of the highest dose harshest chemotherapy protocol out there. He was treated with drugs approved for adults back in the 1950’s. The chemo literally burned him from the inside out. He had oozing, gaping wounds from his lips all the way through his intestinal track and out his rectum. His pee was so toxic we had to wear gloves. Being the stubborn mom I am, thinking I could take or share in some of his pain, I refused to put them on, subconsciously begging and pleading with God to let me get cancer and die with him – or at least suffer alongside him.

Paxton had a double lumen central line sticking out of his chest. Try making that phrase make sense to a 5-year-old! Paxton’s dad had to go back to work two hours away to keep our insurance and our home; unfortunately I was forced to quit most of my work. I had the job of holding Paxton down while nurses ripped the central line dressing cover and tape off to do a ‘dressing change.’
Each week they ripped off another layer of scab that had been taped over another scab. We tried to bribe him with iPad and whatever he wanted to get through those moments. About four months into these weekly changes while being held down and fighting against us with all the might he had left, he kicked a nurse. Then he got in trouble for kicking the nurse and was flagged in perpetuity for behavioral issues. For reacting to what amounted to a true act of torture.

Paxton lived and we are called the lucky ones. And of course, the biggest part of me knows that. Absolutely every single second we get with him with are so blessed and I am so profoundly thankful to God and for the angels on earth that worked tirelessly to save his life.

More on Paxton's journey will be posted tomorrow. In the meantime, take a look this video of the staff at Cincinnati Children's Hospital Medical Center celebrating Paxton's final chemotherapy treatment.

Rita Cary commented 2016-09-27 16:26:55 -0400 · Flag
So happy for Paxton and his amazing family!! You stood by him as the wonderful loving parents you are with the help of such an amazing hospital doctors and nurses!! The prayers of friends and community support was unbelievable as were prayers from everywhere!!! Thankful everyday that Oaxton is cancer free and keep you all in our daily prayers!!! Love you all!!