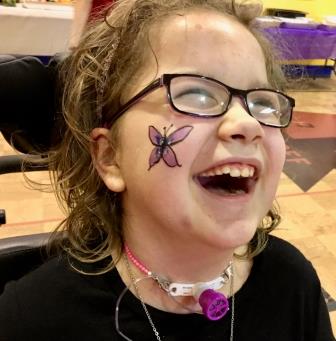 Washington, D.C. During the event, Naomi will share information about her health journey and the importance of children’s health care with members of Congress. Below is her story.

Naomi is a social butterfly. She adores people, and makes new friends everywhere she goes. When she isn’t meeting new people, she enjoys riding her adaptive tricycle, coloring and playing board games. But while 9-year-old Naomi is now happy and social, she was once in a coma and vegetative state for 44 days due to an arteriovenous malformation (AVM) rupture in her brain.

Naomi received excellent, and extensive, treatment at Advocate Children’s Hospital — she was treated for six weeks in the pediatric ICU. During that time, she had multiple brain surgeries, a tracheal tube placement and a g-tube placement. She then spent over six months in pediatric in-patient care, and has since spent over a year receiving out-patient therapy.

While Naomi was in the pediatric ICU in a vegetative state, her parents, Sarah and Steven, were told that her condition may not improve. But the nurses and doctors at Advocate Children’s gave the family hope. They explained that progress was possible, and that Naomi could adapt to her condition.

Naomi, who was once unable to move at all, can now shake her head in answer to questions, move her left arm with purpose, and even stand. Though Naomi is limited in her movement control, she is working on walking, and is a wiz at her second grade math and language arts classwork.

Naomi’s parents tell us that a popular phrase in their house is “slow and steady wins the race,” and Naomi lives by that motto. She continues to make steady progress, helping demonstrate to everyone she meets that anything can be overcome. Sarah and Steven note that, “Naomi is just as social as she ever was, though now she's a little sillier and happier. She likes telling jokes and laughing with people.”

While Naomi has expressed various career goals over the last few years, she currently wants to become a teacher. She is also excited to share her zeal for life with kids of her own one day.

Join us in welcoming Naomi to 2018 Family Advocacy Day!