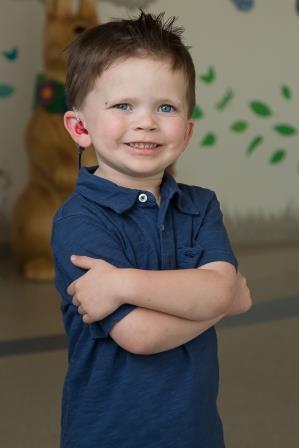 Logan is participating at 2018 Speak Now for Kids Family Advocacy Day from June 26-27 in Washington, D.C. During the event, Logan will share information about his health journey and the importance of children’s health care with members of Congress. Below is his story.

Logan has been through a lot since he was born four years ago, but you’d never know it. An active preschooler who loves superheroes and running around outside, he’s one tough and resilient kid.

At birth, Logan failed his newborn hearing screen. The doctors at the hospital recommended that his hearing be tested further. At just 5 weeks of age, Logan was diagnosed with bilateral profound sensorineural hearing loss — he had been born deaf.

It was at that early age that Logan began his journey with Nationwide Children’s Hospital. Logan’s parents met with the Hearing Program team — a neurologist, a nurse practitioner, a speech language pathologist, an audiologist and a social worker. His team mapped out what Logan’s journey would look like.

At 3 months old, Logan received hearing aids, but they proved ineffective for him — he was too deaf. At 10 months, Logan had simultaneous bilateral cochlear implant surgery. The implants were activated two weeks later.

An audiologist continued to work with Logan weekly for a year after his implant surgery. Eventually, Logan graduated to speech therapy. His speech today is well above age-appropriate, even compared to his typically-hearing peers.

Just before Logan’s cochlear implant surgery, his blood work revealed a dangerously low platelet count. Logan was required to have weekly blood counts for a year to make sure his levels remained stable, and also had to undergo bone marrow biopsies.

Logan is anemic and continues to have moderately low platelets. His condition remains undiagnosed, though the hematology department continues to look for answers.

Despite his difficult health care journey, Logan’s parents are full of gratitude for the care he’s received from the amazing staff at Nationwide Children’s. “Logan’s speech is incredible,” they excitedly shared. “Most people who meet him have a hard time believing he is deaf.”

Logan’s parents are eternally grateful to the Hearing Program at Nationwide Children's Hospital for their quick action after Logan’s initial diagnosis and for all of the progress he has made. Today, Logan is extremely extroverted and loves to shake hands and talk to anyone he meets — we sure can’t wait to meet him!

Join us in welcoming Logan to 2018 Family Advocacy Day!