On March 11, 2014 my world changed when I heard the words “your daughter has cancer,” and I joined a club no parent wants to be in.

Kaylyn was a healthy baby and at 16 months of age she had reached all customary milestones including crawling and walking. But one day she stopped walking. Doctors thought it may be due to a double ear infection. Ear infections were common for her so we didn't think much of it. But as the days went on, she became sicker.

I took her to our local emergency room three days in a row, but the doctors were not able to give us any answers.  On mother's instinct I took her to American Family Children's Hospital in Madison, WI―a 90-minute drive―where she was promptly admitted and the doctors ordered an MRI for her for the following day. While they could not pinpoint what was wrong, they knew something was off as Kaylyn’s white blood cell count was through the roof. 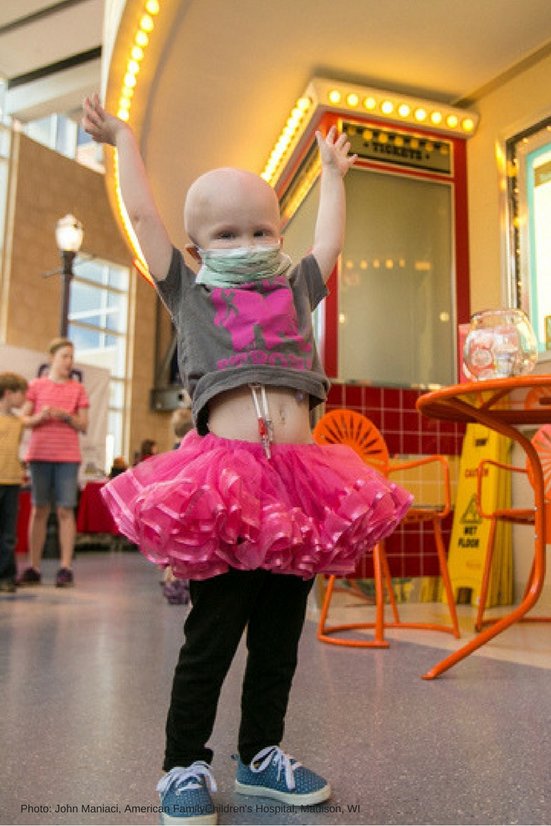 That night she got worse and became very lethargic. The next morning, she had trouble waking up and could barely respond to us. I kissed her goodbye as she went for her MRI, praying everything was going to be ok. Half-an-hour later, while I was grabbing a bite to eat, I got a call from the hospital telling me I needed to come back right away. During the MRI, they had found a tumor in her brain. She had stopped responding and was being rushed into surgery. I couldn't believe what I was hearing.  Doctors at American Family told me that if Kaylyn wasn't at the hospital, in that MRI, at that moment―she would have died. My baby would have died, and I wouldn't have been able to save her.

Kaylyn was in surgery for nine hours. Her doctors were uncertain if she would make it through. The tumor they removed was seven cm and took up the entire right side of her brain. The diagnosis was anaplastic ependymoma grade 3, a very aggressive brain cancer.

Kaylyn did wake up from her surgery, and she came out strong and fighting. She underwent chemo for an entire year and became accustomed to spending three-weeks out of each month in the hospital. She was in the hospital for her birthday, Thanksgiving and Christmas. It was the family’s home away from home.

I quit my job so I could be with her every day for her treatments. The chemotherapy was horrible. It was so strong it killed her bone marrow and she needed to have a bone marrow transplant.  Another drug she was given would seep out through her pores so she had to have a bath every four hours for two days to keep it from burning her skin.

Kaylyn is an amazing little girl. She’s made it through everything with a smile and has been cancer-free for three years. You would never know her struggles—only the scar on her head remains. Doctors will never say she is completely cured from the cancer, but the chances of it coming back—after five years of being cancer free—are slim. She has scans every nine-months to make sure everything is in check.

She just started pre-Kindergarten and loves it. She likes Curious George, playing outside and singing. It truly is a miracle that she is alive and able to do everything healthy kids can do.