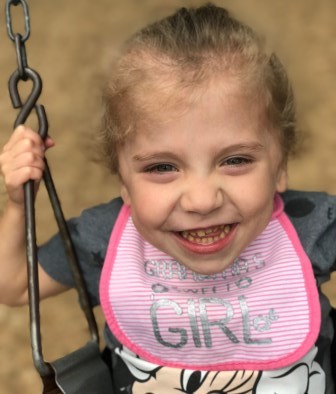 Jacoby is participating at 2018 Speak Now for Kids Family Advocacy Day from June 26-27 in Washington, D.C. During the event, Jacoby will share information about her health journey and the importance of children’s health care with members of Congress. Below is her story.

Imagine being told that your baby’s life would end before it even began. That’s what Jacoby’s parents were told after the doctors diagnosed her with hydrops fetalis, a condition that occurs when large amounts of fluid build-up in a baby's tissues and organs causing extreme swelling — it can be fatal.

Jacoby was given a 5 percent chance of survival. If she did survive, doctors predicted that Jacoby would not be able to sit-up, walk, talk or eat on her own.

But, born at 31-weeks, Jacoby did survive. She spent the first 10 months of her life intubated in the NICU, but the doctors at Cleveland Clinic Children's were able to transition her to a ventilator. She was later transferred to Cleveland Clinic Children's Hospital for Rehabilitation where she stayed for six months. Eventually, she was put on braces to help her walk.

Despite the seemingly impossible odds doctors initially predicted for her, Jacoby has thrived and continues to make progress. She is now off the ventilator, breathing on her own. The braces have been removed and she is walking on her own as well.

Now a vibrant 5-year-old, Jacoby would not be where she is today without the care she received at the Cleveland Clinic and all of the providers that have contributed to Jacoby's well-being. Her parents are truly grateful for the advancements she has made and look forward to cognitive therapies and enrolling their daughter in school.

With today's technological advances, her family is hopeful that she will talk and eat on her own in the future. They have big dreams for her, including college and a family of her own one day. In her parents’ eyes, Jacoby can do anything because she has already overcome so much.

Join us in welcoming Jacoby to 2018 Family Advocacy Day!