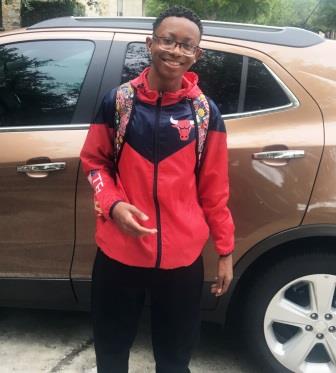 Jacari is participating at 2018 Speak Now for Kids Family Advocacy Day from June 26-27 in Washington, D.C. During the event, Jacari will share information about his health journey and the importance of children’s health care with members of Congress. Below is his story.

Jacari is a young man headed into adulthood with strong opinions about important topics and a bright vision of his future. Currently a sports athletic trainer at his high school, Jacari plans to focus on this field in college to make a career out of his passion.

This young man has come a long way since, at 18 months old, an evaluation team from a local university concluded he would never be able to walk or talk.

Jacari was born with several birth defects due to a condition known as VACTERL. VACTERL is a genetic association, meaning that it’s named for many anomalies that have been seen together in babies, though medicine doesn’t yet know what genetic changes cause the outcomes.

While Jacari wasn’t affected by every aspect of VACTERL, he faced many health battles from his first day of life. Among other serious issues, Jacari was born without a fibula in his left leg and with a double-outlet right ventricle in his heart.

But at that 18-month evaluation, Jacari’s mom, Norencia, refused to accept the prognosis. She would do all she could to ensure he had a bright future. While any mom does their best for their child, raising a child with medical complexity requires parents to develop unique expertise to advocate on behalf of their children — and Norencia is an expert.

When Jacari was just an infant, Norencia had to make the very difficult decision to have his leg amputated above the knee, sparing her son multiple surgeries to attempt to correct it. This devoted mom always requests a second or third opinion from doctors before making decisions about Jacari's medical treatments. Five years ago, she moved Jacari to Texas to be closer to family — that’s when he became part of the family at the Children’s Hospital of San Antonio.

Jacari and his mom have felt welcome and Children’s Hospital of San Antonio since day one. “All services provided at the children's hospital have been outstanding — from primary care to the emergency department when needed,” Norencia gratefully noted.

She keeps all of his appointments with various pediatricians and pediatric subspecialists at Children’s San Antonio and communicates frequently with Jacari's doctors, letting them know if he's had to go to the emergency room or experienced any health problems. With his outstanding care team at his side, Jacari is thriving.

Despite the many challenges he has faced, Jacari is a top student at his high school where he consistently earns a spot on the honor roll. Jacari has a big personality, a great sense of humor and many friends. He has never let his disabilities define him or hold him back — he loves playing basketball and was on his middle school team.

Norencia is very proud of the young man Jacari is becoming, and we’re so proud he’ll be joining us Family Advocacy Day.

Join us in welcoming Jacari to 2018 Family Advocacy Day!