Evan is a 9-year-old triplet who was born 14 weeks early, weighing only 1 pound 14 ounces. During his months in the neonatal intensive care unit (NICU), Evan required the use of a ventilator for several weeks and battled sepsis. His slow and steady progress allowed him to come home earlier than originally planned.

When Evan was 2 years old, he was diagnosed with autism spectrum disorder (ASD) and started attending a day treatment program on top of his already busy therapy schedule.

“On the one hand we weren’t too surprised when Evan was diagnosed with ASD,” said Evan’s mother, Allison. “As a baby he was less interested in the people around him and more interested in noticing things going on around him.” 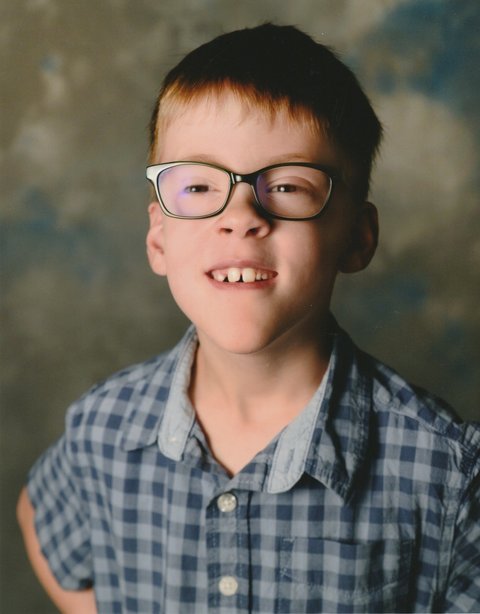 Even now, in spite of three or four therapy and medical appointments per week, Evan never complains and always works hard. He approaches everything with a quiet determination. As a result, he has made enormous progress in overcoming his challenges.

Evan is always cheerful. Although he is typically quiet at school, he is a chatterbox at home. He has a silly streak and loves to make his family laugh. He enjoys riding his scooter and balance bike and playing with sidewalk chalk. He also likes music and can often be found singing and dancing.

Evan has developed a passion for elevators. He would love to ride them all day if he could! Predictably, Evan wants to be an elevator operator when he grows up.