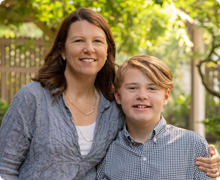 Beckham is participating in Speak Now for Kids Family Advocacy Week from August 10-14, 2020. Through this special event, Beckham and his family will share information about his health journey, Seattle Children’s Hospital’s role in providing Beckham with necessary health care services, and why the public and our elected officials must invest in the future of kids like Beckham.

When Beckham turned 4 years old, he seemed overly anxious and worried excessively. As time went on, he fixated on germs. He washed his hands so vigorously that they bled. At school, Beckham wouldn’t go into the gym because a kid was sick in there the previous week, he wouldn’t go out to dinner because of germs under the table.

It became clear that this was not a passing phase, and the family grew more concerned. About a year later, he was diagnosed with an anxiety disorder.

“We were frustrated to learn that most specialized services were not accepting new patients,” says Erin, Beckham’s mother. “We were given no direction. We were miserable because Beckham was so unhappy, and we had no idea how to help.”

Beckham and his family found answers with Geoffrey Wiegand, M.D., head of the Obsessive-Compulsive Disorder Clinic at Seattle Children’s. Beckham was diagnosed with attention deficit/hyperactivity disorder (ADHD) and OCD at age 9 and prescribed a combination of exposure therapy and medication, which began to make a difference.

“Kids with behavioral health issues are externally stigmatized. The world reprimands them for being ‘strange’ or ‘quirky,’” says Erin. “They are judged, blamed and misunderstood. Parents are often also judged and not believed. We need the world to be more sensitive and understanding of the challenges that kids like Beckham face every day.”