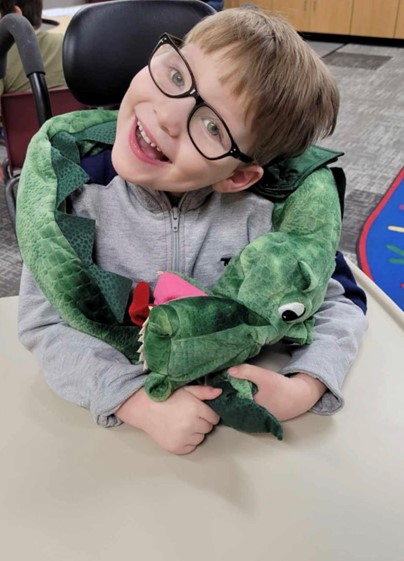 We were honored to have Charlie join us for Family Advocacy Day in 2022. Through this event, Charlie and his family discussed his health journey, and why Medicaid Matters in his healthcare.

Charlie was born at Highland Park Hospital in Chicago. At just six days old, during his first pediatric check-up, doctors discovered he was hypothermic. He was sent to the ER where a spinal tap revealed he had sepsis and suspected bacterial meningitis. He spent the next 30 days in the hospital.

As a result, Charlie struggled with growth and development, and was diagnosed with failure to thrive, oral motor dysphasia and a pediatric feeding and swallowing disorder. His family began working with a gastroenterologist, nutritionist and pediatric feeding therapist that has helped him go from the 10th percentile for weight to the 50th.

Charlie was also diagnosed with a variant of uncertain significance (VUS), a relatively unknown genetic condition on his SYNE 1 gene – a genetic condition that impacts every facet of his life. The SYNE 1 gene tells the brain to make the protein muscles needed to coordinate body movements; Charlie’s VUS is in a low bandwidth which means it is not degenerative or pathogenic.

Charlie and his family moved to Iowa where he began seeing Dr. Matsumoto, a pediatric neurologist at the University of Iowa Stead Family Children's Hospital. Charlie is non-verbal and has a history of stimming—making repetitive or unusual movements or noises—which sometimes mimic seizures. After one distressing episode, Dr. Matsumoto ordered an EEG and video electroencephalogram. The tests revealed that Charlie has seizure tendency brain activity, and ruled out the possibility of epilepsy or other seizure disorders.

“Medicaid coverage is important to our family because it provides Charlie with important wrap-around insurance coverage without needing an exception to our policy,” says his mom, Nancy. “Our private insurance is quickly exhausted with medical bills, but having Medicaid allows us to continue with important life changing therapies that benefit Charlie and ultimately improve the quality of his life. Without Medicaid, Charlie would fall further and further behind his peers. With the support of Medicaid, Charlie is beginning to develop precursory skills needed for independent ambulation. None of this would be possible without Medicaid to serve as a secondary insurance for him.”