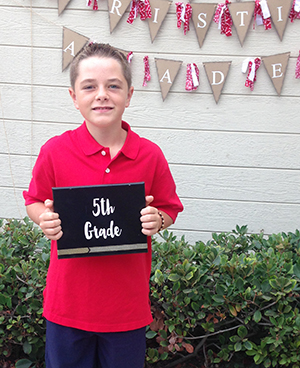 When Els was 9 years old, Jennifer Page brought her son to his wellness checkup thinking it was a routine visit. But the pediatrician uncovered several health conditions sending the Page family on a path requiring life-changing action. At the checkup, Els' doctor diagnosed him as overweight and suspected he was beginning puberty early.

Follow-up tests determined Els had premature adrenarche, a hormonal disorder with the adrenal gland secreting sex hormones earlier than normal, and he was bone age advanced. In most cases, premature adrenarche does not require treatment, but in Els' case, his bone age was about three years too far along. Left untreated, Els' bones would fuse early and he may not grow taller than five feet.

"A lot of Els' problems stemmed from him carrying extra weight," Jennifer says. "We didn't consider him obese. But as we learned more about the damage extra weight can do, it was eye opening." The family immersed themselves in making changes. The Pages consulted a pediatric nutritionist and committed to cutting out processed foods.

The kids went to school one day and Jennifer cleaned out the kitchen cabinets. "The only thing left was a bag of almonds no one would eat," she says. "We didn't want him to lose the weight and not understand how it works. We wanted to make it a lifestyle."
Els learned about reading labels. The nutritionist told him if he couldn't pronounce a word in the ingredients, it probably wasn't good for him. Mastering new eating skills was part of the challenge. At friends' homes, he saw buddies snack on cereal, while at home he had apples.

There were times he got upset because he couldn't eat like his friends. Now Els says he doesn't feel bad about not eating like the other kids, because he realizes he is one step ahead of them with nutrition.

Jennifer bought cookbooks, and together they learned how to make healthier foods. Now he makes homemade granola, almond milk and cauliflower dough. Part of Els' weight management plan includes an occasional treat, and he usually opts for a pretzel. On a special occasion, he might choose ice cream, but the enjoyment doesn't last long. "If I have a treat, I feel good at that moment," he says. "But then I feel ‘ugh,' and I get super tired and crave water."

Els lost 21 pounds the first year; he and his parents felt good about his progress. But his condition became more complicated when tests revealed his bones were still advancing, and he had just two years left on his growth plate. "When the pediatrician said we needed to find a specialist, my experience kicked in," Jennifer says.

Jennifer and her husband, Buck, are no strangers to medical complications and managing care. They had experience because Els' older brother, Max, was born with tetralogy of Fallot—he had four heart defects at the same time. "We're not new to the hospital scene, but we are new to Els' disease," Jennifer says.

"It was a sucker punch. It was confusing, and we didn't know how to do the research." The family found an endocrinologist at Children's Hospital Los Angeles and started their own research efforts to learn more about the diagnosis—Els is one of only 5,000 in the world with the condition.

The agony of the unknown

Once doctors determined a treatment plan, it was time to calculate insurance coverage and figure out how to pay for the growth hormones. The treatments could cost up to $65,000 a year. Since they were working to beat the progression of his bone growth, Jennifer and Buck felt pressure. "I spent sleepless nights not knowing if insurance would cover it," Jennifer says. "We say we will do anything for our kids, but it's hard when it ends up looking like you might have to refinance your home."

The Pages have private insurance, and after a few months, they learned insurance would cover the medication costs this year. The family hopes to give Els the best chance with what is left on his growth plate so he can reach average height before his bones fuse. "What the doctor tells us to do is important, and we will follow that," Els says. "We've made a lot of changes, and I feel amazing now."