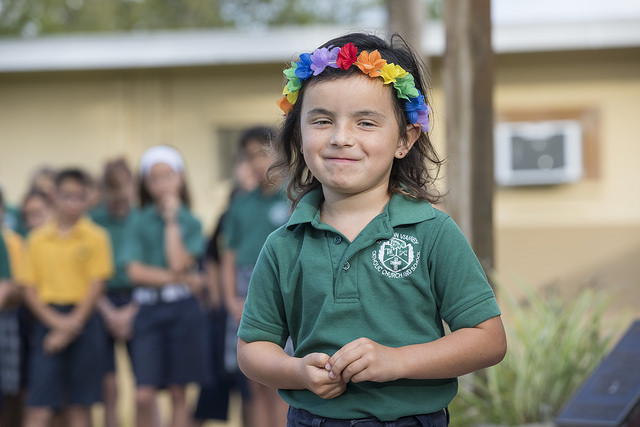 For Childhood Cancer Awareness Month, Speak Now for Kids spoke with Sofia's mom, Cat. Sofia is kind, loving and thoughtful, but she’s also strong and fierce. What began as an unexplained lingering black eye on 2-year-old Sofia quickly turned into shock and disbelief. When an ophthalmologist recommended a CT scan, her parents wanted to speed up the process and sent Sofia the ER at John’s Hopkins All Children’s Hospital.

“It was so fast. We found out that day that Sofia had stage 4 high-risk neuroblastoma,” Cat recalls, shaking her head at the memory. “The team at Johns Hopkin’s All Children’s performed an MRI and a bone marrow test. The news was not good. The primary tumor which began in Sofia’s abdomen spread to her eye and her chin. The cancer was also all over her bone marrow.” What 2-year-old Sofia faced next would be daunting.

“Sofia began five rounds of intense chemotherapy almost immediately,” Cat recalls. “The doctors performed a stem cell rescue, where they pulled out her stem cells so they could be transplanted back in after the chemo. Sofia received very aggressive, multi-agent treatment for her high-risk neuroblastoma, requiring the collaboration of an entire team of pediatric cancer specialists.”

Sofia’s chemotherapy was followed by a second-look surgery to remove as much of the tumor as possible. Then came additional chemo, stem cell transplantation that would help her develop healthy blood and marrow, radiation therapy to target areas where there had been disease, and immunotherapy.

Today, Sofia is doing great! Her cancer is in remission thanks in part to Difluoromethylornithine (DFMO), a new clinical trial at John’s Hopkins All Children Hospital that has helped prevent the reoccurrence of neuroblastoma.

Sofia loves life and is eager to share her story. The entire family are strong advocates for pediatric cancer research and work closely with the Johns Hopkins All Children’s Foundation to raise money for this important cause.