LaKeesha Hines and her son, Braelyn, represented St. Joseph’s Children’s Hospital in Tampa, FL, at our 2010 Family Advocacy Day. Braelyn, who was born healthy but contracted bacterial meningitis as an infant, had been under St. Joseph’s Children’s care nearly his entire life at the time he attended Family Advocacy Day. Medicaid has covered a significant portion of the intensive care he requires. LaKeesha graciously shares what Medicaid has meant to Braelyn’s recovery and well-being.

LaKeesha Hines and her son, Braelyn, represented St. Joseph’s Children’s Hospital in Tampa, FL, at our 2010 Family Advocacy Day. Braelyn, who was born healthy but contracted bacterial meningitis as an infant, had been under St. Joseph’s Children’s care nearly his entire life at the time he attended Family Advocacy Day. Medicaid has covered a significant portion of the intensive care he requires. LaKeesha graciously shares what Medicaid has meant to Braelyn’s recovery and well-being.

When I was first pregnant with Braelyn, I was a mother of a 6-year-old, in a long distance relationship, working full time and attending college part time. I felt joyful, excited and fearful. I was afraid because I knew it would be tough having a newborn with my extremely busy schedule. But because of the joy and excitement I felt about having a life growing inside of me, I made preparations for my unborn child. My boyfriend at the time, now husband, was also working full time and was a full-time college student in another state. Therefore, he had some fears as well, primarily about the financial responsibility a baby would bring.

I had a normal pregnancy but ended up having an emergency C-section because my blood pressure dropped and my baby’s heart rate dropped significantly during delivery. Braelyn was born weighing 8 pounds, 3 ounces and was 21 1/2 inches long. He was completely healthy and we both were fine. But, when my son was 5 1/2 months old, he was hospitalized for meningitis. He spent more than six weeks in the hospital, more than half the time in the intensive care unit. He suffered from uncontrollable seizures, two strokes and he was unable to breathe on his own. I witnessed him stop breathing twice and nurses had to resuscitate him. Ultimately, he ended up having a “VP shunt” placed to drain fluid from his brain and a “G-tube” placed to deliver nutrition directly into his stomach. I remained at my son’s bedside the entire time. While our families did not live close by, they tried to come whenever they could. Unfortunately, they could not afford to travel often.

When we finally went home from the hospital, I was still pumping so my son could benefit from my breast milk. I was able to get a loaner pump as I could not afford to buy one. He had six different doctors: a pediatrician, an infectious disease specialist, a neurologist, a neurosurgeon, a developmental pediatrician and a gastrointestinal doctor. His neurologist wrote orders for him to begin physical, occupational and speech therapies while we were still in the hospital. The therapies continued after we were discharged. My son was basically a vegetable. He did not laugh, smile, cry or seem to feel pain. When I was pregnant, I dreamed of how my baby would be and of the type of man my son would become. Because of this tragedy, my hopes, dreams and aspirations for my son all died. I felt lost and confused. Suddenly I was thrust into the world of caring for a disabled child. I also worried I would not be able to afford to take care of my child or to pay for the care he would need for the rest of his life.

After years of aggressive therapy, weight management, finding the right combination of medications and receiving consistent quality health care, my son is thriving. 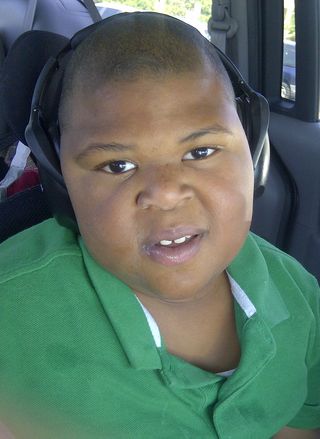 If it had not been for Medicaid, I would not have been able to afford the breast pump that allowed my child to receive those very important antibodies found in my breast milk or the surgery to install the G-tube which allowed him to receive the milk into his stomach. I would not have been able to afford the health care or the therapies that have aided in his recovery and have contributed to Braelyn’s opportunity at a quality life. Medicaid has allowed us to provide Braelyn with a wheelchair, glasses and diapers, which he continues to wear to this day. Medicaid has also allowed my son to receive aquatic therapy which has helped to improve his motor skills. Thanks to the quality care he received by way of Medicaid, my son was finally able to walk on his own at 6 years old.

It is extremely important for everyone who has never received Medicaid to know it is not just in place to help those who are low-income, but for children who are chronically ill and require more intense, quality care than the average child. Because I know my child will continue to need assistance above and beyond what the average child will need, I am praying Medicaid continues to exist. I am extremely thankful for Medicaid and know without a shadow of a doubt that having it aided in giving my son the opportunity for a rich, fulfilling life.