Autism Diagnoses Up 30 Percent: What You Need to Know

Last month, we learned from the Centers for Disease Control and Prevention (CDC) that one in 68 children are diagnosed with autism in the United States. Even more shocking, boys are reported as almost five times more likely to receive a diagnosis of autism spectrum disorder (ASD) than girls. 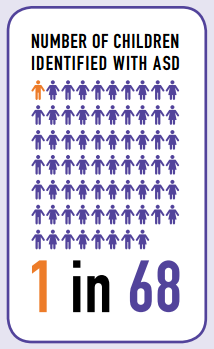 These figures represent a 30 percent increase in determinations of autism since the CDC estimated two years ago that one child in 88 suffered from the disorder.

ASD is defined by the CDC as “a group of developmental disabilities that can cause significant social, communication and behavioral challenges.” Children diagnosed with ASD are often described as falling along the autism spectrum as symptoms can range quite widely. Those said to have extreme Autism tend to be withdrawn, speak little, avoid eye contact and engage in repetitive actions. However, other children with more mild forms of the disorder, such as those with Asperger syndrome, may only demonstrate symptoms to the trained eye. This new definition is helping eradicate the classification of some children odd or abnormal but not afflicted with any known disease.

What’s more the annual costs of raising a child with ASD, which includes education, medical expenses, ASD-related therapy, family-coordinated services and caregiver time, is about $17,000 more on average than children without ASD. In 2005, the average annual medical costs for Medicaid-enrolled children with ASD were $10,709 per child, which was about six times higher than costs for children without ASD ($1,812).

This Autism Awareness Month, Speak Now for Kids would like to direct your attention to the importance of continued research into understanding those who are most likely to develop ASD, why and how ASD develops in children, and how the health care community can best support individuals, families and communities affected by ASD.