Alyssa’s medical history is long and complicated.  Born a few weeks early and weighing in at six pounds, six ounces, she started life with a bit of a struggle.

NOTE: On June 19-20, the Children's Hospital Association will be holding our ninth annual Family Advocacy Day in Washington, DC. Leading up to the event, we'll be posting stories by the amazing moms and dads of some of our attending children. Today's story is about Alyssa de Jong, by her mom, Angela.

Alyssa’s medical history is long and complicated.  Born a few weeks early and weighing in at six pounds, six ounces, she started life with a bit of a struggle. It’s not just that she was small, but that she didn’t grow, eat, sleep or develop as I thought she should. Doctors said she was okay and she would catch up—don’t worry. From the start, it seemed to me that something was not quite right. Why didn’t she hit milestones like the other kids? I was told she was developmentally delayed.  But why? Why was she so much smaller than the other kids, and didn’t seem to grow? I was told she had short stature. But why? As she got older, Alyssa was riddled with medical symptoms: epilepsy, hypotonia, short stature, two heart defects, scoliosis and cervical stenosis among the many. But why? Nine years would go by with no answers, only more medical issues.

It wasn’t until Alyssa’s dermatologist called to tell us the spot removed from her forearm was melanoma that we were able to find answers. The cancer started on her arm and traveled to her lymph node. She had three surgeries along with numerous tests, procedures and scans. St. Jude Children’s Research Hospital provided my daughter with the most top notch and compassionate care possible. They found the cancer and took it away. But then they went even further.  They looked at her medical history as a challenge and told my family they would not stop until they figured it out. Yes, there were many tests, scans and blood workups along the way. But there was also an answer. They were finally able to diagnose my daughter with a rare chromosome syndrome. 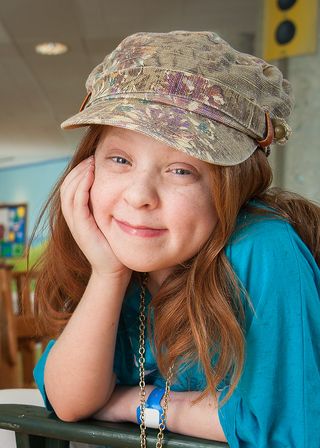 Now at 10 years old, we have a name for my daughter’s medical problems. We know what it is, what it means and what we need to do to take care of her. Having an answer was like having the heaviest of burdens lifted from my family’s shoulders. St. Jude did not give up on finding an answer, even when it seemed no answer was in sight. St. Jude not only saved my daughter’s life, but also gave her hope for the future. Knowledge is power, and they gave our family the power we needed at the darkest of times. Now we look towards a bright future with our daughter.

Just as our family was starting to put some distance between us and cancer, we were hit again. My six-year-old nephew was diagnosed with leukemia. We were absolutely knocked off our feet. Once again we put our trust in St. Jude. He is doing great and is in the second phase of treatment; however, he still has a long road ahead. Again, the compassion and care we found at St. Jude has been world class.

Our family is thrilled to take part in Family Advocacy Day in hopes that we can make a difference. We hope that through our journey and our struggles we can help pave the way for future families lost, feeling alone, looking for answers. St. Jude Children’s Research Hospital is the most amazing place filled with caring, compassionate staff, doctors, nurses and researchers who are some of the best in the world. We have looked for the words to say “thank you” for everything they have done for our family. But words just are not enough. When the opportunity came up to represent St. Jude for Family Advocacy Day, it was an easy choice to say yes. But it turned out to be not so simple—it falls on the same day as our One Direction concert tickets.  I sat down with Alyssa and let her make the choice. Apparently, it wasn’t as difficult as I thought. Even my 10 year old daughter knew that this was a bigger deal than a concert. You see, despite all the surgeries, tests, scans, needles and scary stuff, St. Jude is still a place of happiness and fun to my daughter. And, she is happy and excited to represent it!