Aidan was born in May of 2008. Although we knew he would come into this world facing almost immediate open heart-surgery, we considered ourselves fortunate  — fortunate in that we knew, in advance, that Aidan would be born with a life-threatening cardiac defect known as hypoplastic left heart syndrome (HLHS). In short, Aidan would be born with a half-functioning heart, which, unless repaired through immediate intervention, meant he would not survive.

In January of 2008, like most expectant parents, my husband, Nick, and I were looking forward to our Level II or “20 week” sonogram. Not wanting to know if we were having a boy or a girl, we went in to this appointment just wanting to check on the baby’s overall health. Perhaps it was “mom’s intuition,” but as the sonogram began, I started to have a feeling that something was wrong.

When the technician asked about wanting to know gender, I said, “yes.”  My husband looked at me perplexed. I simply said, “I want to know everything.” We were told we were having a boy. After the sonogram was complete, we met with our doctor. It was in that moment we began to worry; he told us that they were concerned about heart function. However, nothing was definitive, so a repeat sonogram was needed. A few days later, we heard words that would change our world.

I had a mantra repeating over and over in my head: “just keep listening. You need to hear this. You can fall apart later. Pay attention…” over and over again. 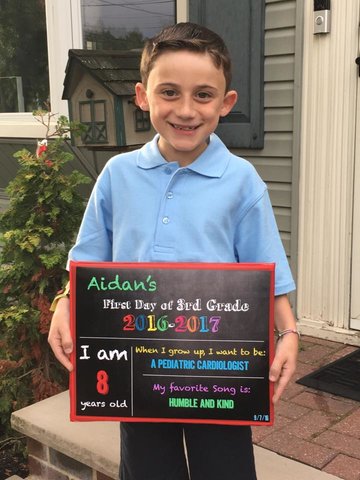 What was actually happening was, for the first time, we were hearing the words hypoplastic left heart syndrome, learning about a three-staged open-heart surgery plan, listening to the need for cardiac catheterization procedures along the way, and hearing that surgery might fail and that a transplant at birth may be necessary, and also, that the likelihood of getting a newborn heart was next to none. We sat and we listened and we cried. We then composed ourselves because it would start all over again.

The car ride home from the doctor’s office was a long one — not because of traffic or distance, but simply because Nick would need to pull over each time the crying was too much. His tears or mine — it didn’t matter. Everything we had imagined had just changed. Later, someone would tell us that we needed to grieve for the loss of our child because the one we had imagined was no longer with us.

Grief, that’s what came next. Its good friend anger was sure to follow.

Over the next few months, what once was a monthly doctor’s appointment became two or three appointments. Living on Long Island, we were fortunate to have access to New York City and some of the world’s most respected cardiac professionals. We would travel into Manhattan monthly, at first, and would have long days filled with appointments — OB/GYN, cardiology and tours of the hospital. What was supposed to be a fun, exciting and joyful first pregnancy, turned into one filled with unfathomable fear, uncertainty and anger.

Monthly appointments became weekly ones and before we knew it, it was time to check in and get ready to meet our son.

On a Wednesday night in May, with an induction scheduled, Nick and I arrived at NewYork-Presbyterian-Morgan Stanley Children’s Hospital. I remember how oddly calm we both were. Perhaps it was because we had exhausted ourselves emotionally over the months leading up to this moment. With medications onboard, contractions began. All went well…until it didn’t.

My epidural was already working its magic when I was greeted by a crowd at the foot of my bed. The baby’s heart rate was dropping and, assuming the worst, the team wanted to deliver him quickly. After failed attempts at repositioning him, I was whisked out of the room headed to an OR. Within seconds, our son, Aidan, was born. I didn’t get to see him.

My son was born without my husband by my side, and now, I couldn’t see or hear my baby. My baby. As if sensing my swirling questions, the doctor leaned over and told me, “he was pink and looked good. You don’t hear him because they took him to the nursery.”

In all the movies, books and stories that I know, never once has the story gone, “and the mother gave birth and never got to see or hold her child.” I felt as though I had been kicked when I was already as low as I could be. How could it be that I didn’t get a glance at my child? I was selfish. I told myself, “you’re being selfish. Let the doctors do their work. But he’s my son…”

Dad’s are amazing people! They need to get more credit for the things that they do. Nick, having missed the delivery (not part of the plan), was the first to see Aidan. He was great about telling me everything that he had learned from the team in the nursery and showing me photos on the camera. Nick did the best he could to put on a brave face and play the part of the proud papa. He ignored his feelings to comfort me.

I got to see my son, for the first time, wheeled on a hospital bed into a small nursery. I could see him and reach out for him but couldn’t hold him. There is no word in the English language to adequately describe this feeling. By that evening, Aidan was put onto a ventilator to keep him more relaxed. What I heard was “he needed a break and now you can’t hold your child at all.” I was crushed.

At five days old, weighing in at five pounds, Aidan went in for his first open-heart surgery. We walked him down to the OR and watched him be taken away. I was numb. We found ourselves in the waiting room surrounded by our family. It doesn’t matter how old you are, in a moment like that, when you see your parents, you instantly need them and you break down. Hours tick by — some moments faster than others — and then finally, when you feel like you might burst, you see the surgeon, the man who just operated on your son’s walnut-sized heart, emerge. We knew Dr. Queagenbeaur to be a man of few words. The meeting was brief but that’s all it needed to be.

“Surgery went well and he is in recovery.”

This continues every day because there will never be a day when I don’t think about Aidan and his health. This first surgery was followed by an unexpected trip, via ambulance, back to Columbia Presbyterian for a weeklong stay and a cardiac catheterization after we feared surgery had failed. It hadn’t — it was just a hiccup in Aidan’s story that scared us more than we had thought possible. Time not spent in the hospital was spent visiting the cardiologist for follow up appointments as frequently as every other day, and now, every six months.

Two more open-heart surgeries happened; the second in November of 2008 and the third in April of 2011. A second and third cath were performed along the way as well. Trips to the pediatrician for routine well-exams felt like the most “normal” thing we did as new parents. From our pediatricians five minutes from home, to our cardiologist who is about 10 miles from home, our day-to-day care was easy to navigate. Trips into Manhattan were different as they required planning based on rush hour traffic schedules, bridge crossings and tolls and New York City parking rates of $30+ a day.

Have a baby and get a life lesson on health insurance! When Aidan was born, Nick and I had individual insurance policies. We realized that Nick’s plan wasn’t taken by the doctors at Columbia which posed a very scary reality.  Since I had my own policy, we opted to add Aidan to my coverage and leave Nick as an individual policy. That sounded great, in theory. You see, I never went back to work. I took maternity leave, vacation time, and finally FMLA. This brought me through to October when my insurance was no longer being covered by my employer.  Welcome COBRA payments. So now I was no longer getting paid, we were paying for health insurance, and getting ready for another round in the hospital. We researched other insurance options offered through Nick’s employer and found a plan that was taken by the doctor and the hospital. We knew that surgery was inevitable and having the best coverage possible was a must.

Aidan’s diagnosis wasn’t the first time I learned about congenital heart defects (CHD) — I am a proud CHD sister! One of my brothers, Clayton, was born with a CHD. He underwent open-heart surgery at a day and a half old.  Growing up, I knew what it meant to have a “special heart” and why Clayton had a large scar running down the length of his chest. Armed with this information, we met with genetics specialists to see if there were any correlations between Clayton’s defect and Aidan’s. With access to the best and the brightest minds, the final outcome was “it just happened twice in your family and there’s no reason why.” Aidan’s issues are focused on the left side of the heart while Clayton’s are on the right. It amazes me that, given the statistics about CHD and it being the #1 birth defect, that more people aren’t aware of CHDs. Did you know that it’s estimated that 1 in every 110 babies will have a CHD?

A child with a CHD is just that – a child! Each August, at the beginning of the school year, I sit down with Aidan’s teacher and I share a document, “All About Aidan.” This gives an overview of Aidan’s condition, what the teacher needs to be aware of, and what to do if Aidan is having a medical issue. But the MOST important part of this meeting is to stress the fact that Aidan is a happy, healthy kid — and he is normal. This isn’t my favorite word, but for now, it will have to do.

Aidan’ is Aidan. This is his life and it is the only life he knows. Not playing a contact sport is just part of his life. But, so is swimming every week, improving week after week and earning medals of achievement. Riding a bicycle, jumping on a trampoline, painting a picture, reading a book….this is normal (again, not the best word). It’s HIS life and he is living it. He is LOVING it. He is OWNING it.  He is who he is. Aidan, the kid with a self-proclaimed “special heart,” will tell you about his half a heart and how many surgeries he has had. He is proud of who he is. He doesn’t expect a free pass in life, and he doesn’t want anyone to pity him.

And neither do we because he is a happy, healthy, yes healthy, young boy who is full of life.

Looking for more resources for parents of children with CHD? Click here to learn more about Mended Little Hearts.