A Family's Journey With Juvenile Arthritis

July is Juvenile Arthritis (JA) Awareness Month. Charity, a mother of two children with the disease, shares her family's experience when a lump on her daughter's leg was diagnosed as a type of JA 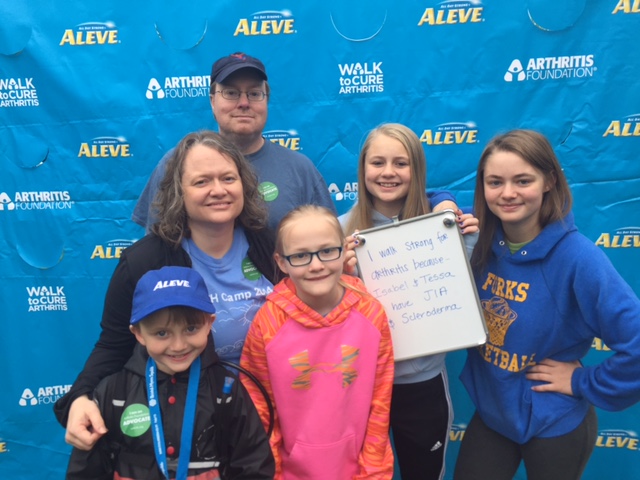 Exactly a year ago, we were preparing for a fun day on our friend's boat. Full ice chest, swimsuits, and great friends. As we were getting ready to swim, we noticed a strange, lumpy discolored texture going from Tessa's hip down to her knee on her right leg. After nearly 6 years of Isabel's arthritis, I knew this was concerning. After the holiday weekend, we made appointments with her doctor and we were referred to dermatology. Our appointment was in August, a few days before her birthday. Between July 5 and The August appointment, I lost track of how many times we heard, "wow, I've never seen anything like that!" Not reassuring to hear that from your doctor!

We were so thankful that the Dermatology department at Seattle Children’s Hospital had seen cases like Tessa’s before. Since it is a teaching hospital, we quickly had a room full of people checking Tessa's leg. She was diagnosed with Linear Scleroderma/Morphea. They immediately called rheumatology and had Isabel's doctor come in. Tessa had also seen the same rheumatologist because she had been complaining of joint pain and stiffness for several months prior. By the end of the appointment, we had a treatment plan and by the end of the week she was scheduled for a series of 12 steroid infusions.

Linear scleroderma is an autoimmune disease where the tissue between the skin and muscle hardens and thickens. It is a rheumatoid based illness and has some symptoms and treatments that are similar to those for arthritis. It generally stays on the one side of the body but we have to check her entire body. Because her area of disease involves major joints (hip and knee), we have to be more aggressive in treatment to avoid loss of mobility. She has regular vision exams to check for uveitis. There are more serious types of the disease but Tessa has not been diagnosed with those.

One year later, the damage done by the scleroderma has been reversed in some places, still present in others and we don't expect those areas to change any further. Tessa continues on weekly doses of methotrexate which is a low dose chemo drug to suppress her immune system. You can guess the side effects. She is still being monitored by both dermatology and rheumatology together. She continues to present with symptoms that are not fully consistent with her disease so probably more tests in the future.

We are thankful for Seattle Children's Hospital and their wonderful doctors. Washington is one of the very few states with more than 4 pediatric rheumatologists. Most states have none. Idaho, Alaska, Montana families all come to Seattle for treatment. We are very fortunate to live where we do and have access to such a wonderful team!